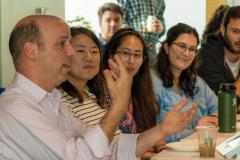 More than 40 students crammed into the fifth-floor boardroom of Grainger Hall on a Friday afternoon to get answers to their questions about the inner workings of Congress. The session was the first in a series of Policy Boot Camps that will feature Nicholas Institute professionals sharing their expertise engaging directly with decision-making institutions.

“The time with the students was a blast,” said Tim Profeta, the Nicholas Institute’s director, who led the opening session. “The free-flowing conversation made it so much easier to share insights, and to ensure I was responding to the questions that were really on their mind. I hope they got as much out of it as I did.”

For the conversation, Profeta drew on his two decades of experience working with Congress—first as a staffer to former Connecticut Sen. Joseph Lieberman and now as a bridge to Duke’s world-class research to help inform policy making.

Profeta started with a brief overview of the differences in makeup and function of the House of Representatives and the Senate. That soon gave way to an open discussion with the students about the formal and informal mechanisms by which environmental policy gets made in Congress. Topics included:

Conor Mulderrig, a master of environmental management (MEM) student in the Nicholas School of the Environment, said he appreciated the relaxed atmosphere.

“It was much more approachable from a student’s perspective,” Mulderrig said. “In formal settings, it’s a little bit harder to articulate what you want to ask. When you’re surrounded by your peers that are all on an equal footing, it makes it a lot easier.”

A “political junkie” who is studying climate change policy, Mulderrig came to the boot camp eager to learn more about the behind-the-scenes logistics and negotiations involved with enacting policy changes in Congress.

For both him and fellow MEM student Gray Li, the boot camp also presented a networking opportunity. They were among the students who asked Profeta about pathways to a career on Capitol Hill and how they can get involved in the Nicholas Institute’s work.

Li is focused on the economics of carbon pricing and how it could be used to address climate change. The discussion with Profeta brought a new element to what she has been studying.

“I’m not very familiar with the political side of how things work, so this kind of opens things up for me a little bit,” Li said.

The Nicholas Institute will hold three more boot camps in the coming weeks. Speakers and topics covered are:

Students are encouraged to attend in person, but a live stream and video replay will be available on Panopto, which can be accessed with a Duke NetID. Video links for the upcoming sessions and more information can be found at bit.ly/NIBootCamps.