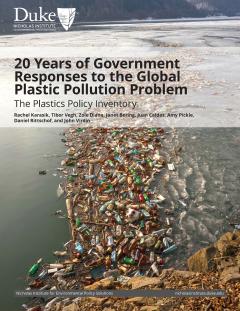 DURHAM, N.C. — Governments at every level have taken steps over the last decade to reduce the flow of plastic pollution into the world’s oceans, according to a Duke University policy analysis published today. The analysis finds, however, that the vast majority of new policies have focused specifically on plastic shopping bags. More study needs to be done to determine whether they have worked.

Researchers from Duke’s Nicholas Institute for Environmental Policy Solutions and the Nicholas School of the Environment compiled an inventory of nearly 300 sub-national, national and international policies instituted between 2000 and mid-2019 to target plastic pollution. The analysis answered a call from the United Nations Environment Assembly to synthesize the policy response of governments to plastic pollution as a baseline for increased monitoring of progress and to inform future policies.

“At the international level, we think this is probably the most detailed attempt to date to measure what governments are doing, though admittedly incomplete,” said John Virdin, director of the Ocean and Coastal Policy Program at the Nicholas Institute. “The next step would be to try to work with modelers and others to estimate how much of an effect these observed government responses will have on the problem.”

To that end, the Duke team has made the entire inventory of policy documents available in a searchable database. The database can serve as a resource for policymakers and other researchers to explore how governments are responding to different types of plastic pollution, Virdin said. It will also allow researchers to add new policies and expand the picture of governments’ responses to plastic pollution to keep the inventory current.

Analysis of the inventory showed a clear upward trend in plastics policies in recent years that was largely driven by attempts to regulate plastic bags and bottles through bans or, to a lesser extent, taxes, levies or fees. During the analysis period, national governments had instituted some type of policy addressing plastic bags in more than 40 countries — including China and India — covering a cumulative population of 3.7 billion people.

While not as visually obvious as plastic bags, microplastics threaten marine ecosystems and create a food security issue for people, said Daniel Rittschof, Norman L. Christensen Distinguished Professor of Environmental Sciences in the Nicholas School of the Environment.

“All the plastic that’s outside in the environment — even if it doesn’t show up in the ocean — is delivering chemicals to the ocean because it’s getting rained on,” said Rittschof, whose research has long focused on the effects of polymers and plastics on marine organisms. “Think about an automobile, think about polyvinyl chloride siding, think about fences, think about all the clothing. Everywhere you look, there’s plastic.”

In addition to disparities in how different types of plastic pollution are being addressed, geographic gaps exist in government responses. Among the top 20 biggest plastic polluters according to one model, seven have no national policy document in the inventory, and another four had policies related only to plastic bags. The research team notes that policies may actually exist in those countries but could have been missed because searches for the inventory were limited to certain languages.

As part of its analysis, the Duke research team also searched the scientific literature for studies on the effectiveness of plastic pollution policies. The sample was again heavily weighted toward efforts related to plastic bags. The literature review showed plastic bag policies were consistently reported as leading to significant net reductions in use — typically between 40 percent and 60 percent — but often with unintended consequences, such as increased demand for other types of non-reusable bags. The policies tended to be considered by the literature as more effective when paired with public awareness or educational campaigns, a step fewer governments appeared to be taking.

Fewer than 10 percent of the national policies in the inventory have been studied for their effectiveness. On average, effectiveness studies were published six and a half years after plastic reduction policies were adopted.

“The literature has limited information about policy effectiveness,” said Amy Pickle, director of the State Policy Program at the Nicholas Institute for Environmental Policy Solutions. “Any way you want to assess effectiveness, we can’t yet tell the world what's the right policy in the right place at the right point in time in the plastic life cycle.”

The analysis was funded and supported by The Pew Charitable Trusts as part of its work to prevent plastic waste from entering the world’s oceans. In the coming weeks, Pew will present evidence-based pathways to reduce the flow of plastics in the ocean showing that, by working together, societies can significantly reduce the amount of ocean plastic pollution.

Note to broadcast editors: Duke University maintains two television studios with LTN and satellite connectivity, plus two radio studios with ISDN and Comrex connectivity. Both are available for domestic and international interviews, live or taped. These services are usually available during normal business hours and, with enough advance notice, after-hours and on weekends. Broadcast reporters should contact Jeremy Ashton to arrange an interview.