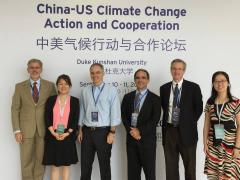 A team of Duke University faculty brought their expertise on climate change, efficiency and other energy-related topics to China for a workshop at Duke Kunshan University (DKU) and visits to other universities and facilities across the country. The event was cosponsored by DKU, the Duke University Energy Initiative, and the Nicholas Institute for Environmental Policy Solutions.

More than 100 people from academia, government, business and non-profit organizations attended "China-U.S. Climate Change Action and Cooperation," a workshop held Sept. 10-11 on the DKU campus in Kunshan. The event was organized by Duke faculty in collaboration with Peking University, Tsinghua University, and Michigan State University.

DKU recently approved the establishment of a new Environmental Research Center, and plans to launch an International Master’s in Environmental Policy (IMEP) degree program in the Fall 2017 semester, subject to approval by the Duke faculty and trustees.

"China is seeing dramatic growth in demand for energy, and Duke University has an enormous amount of expertise to offer as China's leaders try to meet that demand while addressing both local air pollution concerns and global climate change," Newell said. "This trip was a great opportunity for us to make connections in research and educational opportunities that will benefit us all long into the future."

In welcoming remarks, DKU President Liu Jingnan emphasized the importance of bilateral collaboration between the U.S. and China in the climate and environment fields.

The INDCs are the publicly stated post-2020 climate actions that countries will commit to take under a new international climate agreement that is due to be produced at the U.N. Framework Convention on Climate Change Conference of the Parties in Paris in December 2015.

"The event was a great example of collaboration at Duke to bring value to the Kunshan campus," said Tim Profeta, director of the Nicholas Institute. "The Energy Initiative and Nicholas Institute were able to join together to ensure that Duke's expertise on climate and energy policy was brought to DKU in a way that fostered ongoing collaboration with Chinese partners."

Additional sessions covered national and regional climate policies in both the U.S. and China, as well as bilateral and multilateral collaboration opportunities between the two countries.

"It was important to place U.S. climate policy in the context of the three branches of government—executive, legislative and judicial—for the Chinese audience," said Murray, who presented on U.S. national climate policy. "My presentation gave an overview of the Clean Power Plan, just issued by the U.S Environmental Protection Agency to regulate greenhouse gases from power plants, in order to facilitate collaboration between climate regimes across the Pacific."

In addition to helping experts from both countries better understand their respective climate and environmental policies, the workshop was also intended as a platform for U.S. and Chinese scholars to explore important research questions together.

Before and after the workshop, Newell, Pizer, Wiener and Murray  made trips to Beijing, Shanghai and Kunshan. The group visited four top universities in China—Tsinghua, Peking, Renmin and Fudan University—to present seminars and explore collaboration opportunities.

Newell presented his recent study on "Nudging Energy Efficiency Behavior: the Role of Information Labels" at Tsinghua University, while Pizer presented "Comparing Emissions Mitigation Efforts across Countries" at the other three universities.

The Duke group also met with representatives from China's Energy Research Institute, National Development and Reform Commission, and Energy Foundation China in Beijing. They finished the trip with a visit to the Donghai Bridge Wind Farm in Shanghai, the first commercial offshore wind farm in China.