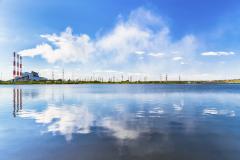 On April 24, eight former commissioners—including five former chairs—of the Federal Energy Regulatory Commission submitted a “friend of the court” brief to the D.C. Circuit Court of Appeals to offer their energy expertise to the Court in a challenge to the U.S. Environmental Protection Agency’s latest power sector carbon rule. The brief was written and filed by Kate Konschnik, a senior lecturing fellow at Duke Law School who also serves as director of the Climate and Energy Program at Duke University’s Nicholas Institute for Environmental Policy Solutions.

The EPA finalized the Clean Power Plan in 2015 to set carbon emission standards for existing power plants in the United States for the first time in history. A court challenge eventually resulted in the plan being stayed by the U.S. Supreme Court. In July 2019, the EPA replaced the Clean Power Plan with less stringent standards in the new Affordable Clean Energy (ACE) rule. A coalition led by the American Lung Association has since sued the EPA for scrapping the original rule.

In the amicus brief, the former FERC commissioners specifically dispute one of the EPA’s stated rationales for replacing the Clean Power Plan. As part of its approach for reducing power plant emissions, the plan assumed the deepening of industry trends that shifted power generation between plants to lower-emitting natural gas and renewables. The ACE rule omits generation shifting as a basis for setting a pollution standard because the EPA now contends that would encroach on the jurisdiction of FERC and the states under the Federal Power Act.

The brief states that the former FERC commissioners were not aware of a single case in which the Commission had challenged an EPA rule aimed at the power sector as intruding on their jurisdiction. The brief also notes that Congress intended the Clean Air Act to be used to regulate power plants. Narrow references in energy and air legislation about different agencies needing to consider each other indicate that Congress knew there could be regulatory overlap but expected that the agencies could exercise their distinct authorities at the same time, the former commissioners argue.

The former FERC commissioners who signed onto the brief were appointed by presidents from both parties and collectively served on the Commission for a total of 42 years, spanning nearly the entirety of its existence. Three also served on state public utility commissions. The group includes Norman Bay, a former FERC chair who is now a non-resident senior fellow at Duke. Bay assisted Konschnik in preparing the brief.

Read the amicus brief from the former FERC commissioners.