Tucked in between the Sulphur Spring Range and the Diamond Mountains in Nevada’s Eureka County is a valley known for its farms of alfalfa and grass hay.

With Desert Land Entries in the late 1950s and 1960s and more availability of electricity in the early 1970s, farming took off in the Diamond Valley and has remained a steady base of employment for many residents. It’s the valley’s groundwater—about 95 percent goes to farming—that’s so essential to ensuring these crops remain an economic driver in the rural region.

But the aquifer that Diamond Valley farmers depend on to irrigate crops is expected to dry up within 30 years absent measures to sustain it from excessive pumping and over allocation.

The area, as elsewhere in many western U.S. states, relies on a system that originated more than 150 years ago to determine who gets water from the aquifer and who doesn’t. The essence of the doctrine of prior appropriation promises rights to a set amount of water on the basis of who first began using it.

With water shortages worsening in Nevada, the state’s Office of the State Engineer declared Diamond Valley a critical management area. The declaration comes with a mandate to create a sustainable use groundwater management plan within 10 years or face water restrictions.

“If a groundwater management plan is not developed and approved by the end of this 10 years, the State Engineer, the ultimate authority over water allocation and use in Nevada, is obligated to regulate by priority,” said Jake Tibbitts, Natural Resource Manager for Eureka County, Nevada. “This means that there will be strict regulation according to water rights seniority. So, junior water rights holders will be simply cut off, regardless of type of use, efficiency, or economic output.”

An effort to conform to this mandate could be under way as early as spring 2017, when the Diamond Valley is expected to test a blueprint for buying and selling water rights to redistribute the valley’s water. The trading should shift supply to where it’s needed most and should allow those with surplus supply to profit from it.

The blueprint was developed by researchers at Duke University’s Nicholas Institute for Environmental Policy Solutions and builds on lessons from Australia’s search for a water rights and management framework that would increase the contribution water makes to the economy, the environment, and the community.

“The blueprint gives shareholders incentive to manage water very efficiently,” said Mike Young, a visiting fellow at the Nicholas Institute who led creation of the blueprint.

Young, who is also a professor at the University of Adelaide, is one of the acknowledged architects of Australia’s current water right and trading system. Work on the development of this system began in the mid-1990s.

“Australia was lucky” Young said. “By the time the extent of the millennium drought set in, the new water rights system was there to help pull the country out of its worst drought on record with much less damage to crops and impacts to stream flows than otherwise would have been the case.”

Applying the Blueprint to the Diamond Valley

The basis for the blueprint Young developed with other Nicholas Institute colleagues for the Diamond Valley proposes a move from the “prior appropriation” system to water “shares.” All irrigators in the valley become shareholders, just like shareholders in a company. Before the start of irrigation season, an appointed board makes allocations in proportion to the number of shares held. Allocations per share are to be reduced every year until the water table of the aquifer stabilizes.

“The blueprint aims to ‘unbundle’ water rights by allowing shareholders to sell their allocations, with no risk to their water rights, to those shareholders that may need more of the resource,” Young said. “Initially, senior water rights holders will be given more shares that their junior counterparts. To keep administrative costs low, it is proposed, that Eureka County hold sufficient shares to offset impacts of water taken by households and businesses.”

Young compares the system for keeping track of these transactions to a bank account. When allocations are made, money is transferred to that selling shareholder’s account and debited from the buyer’s account.

Water use is recorded and tracked with a metering system. To discourage overuse, shareholders receive penalties on the basis of the number of days their account is in deficit, and surplus allocations carry over to shareholders’ accounts the next year. 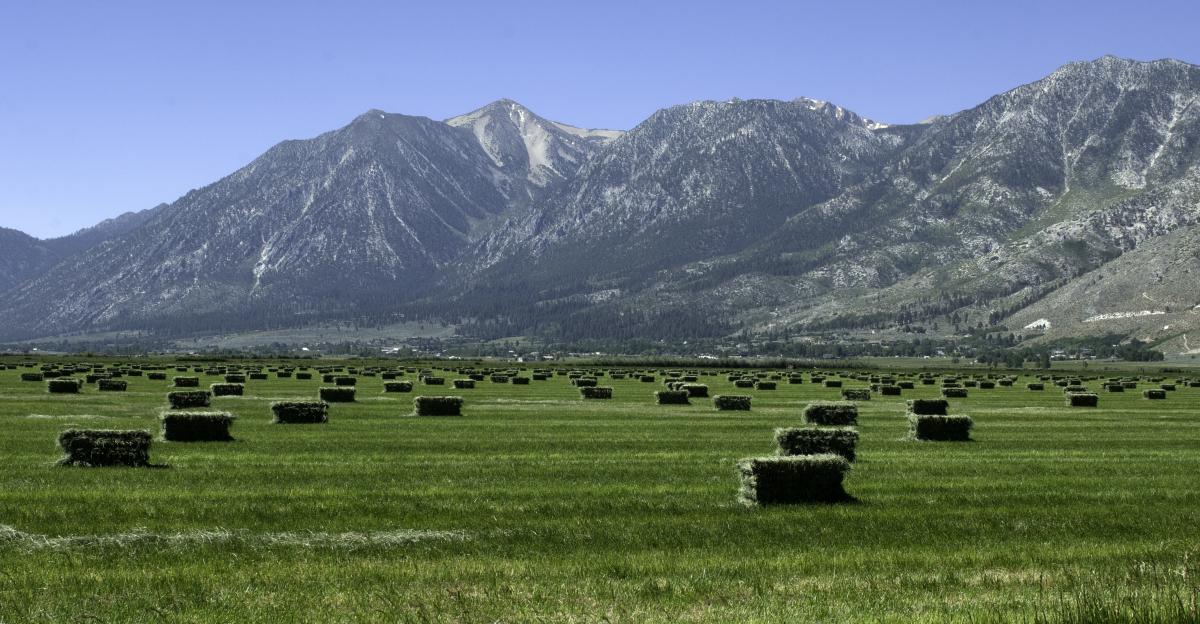 “Under the current prior appropriation system, there is little incentive to innovate and ensure water use is maximized,” Young said. “In a proposed unbundled water rights system, innovation is encouraged. Investment and risk taking is rewarded. A blunt, all-or-nothing irrigation system is replaced with a smart one that encourages every water user to be as efficient and productive as they possibly can. Two water markets soon emerge, one for shares and the other for allocations.”

The blueprint developed for Diamond Valley in the Nicholas Institute report Unbundling Water Rights: A Blueprint for Development of Robust Water Allocation Systems in the Western United States is serving as a guide to development of a share-type system that best meets the valley’s needs.

“As with a blueprint used by a home builder, there are changes we are making to adapt to our local needs and desires as well as legal and political constraints, but the foundational structure built off of the blueprint remains,” said Tibbitts, who is helping facilitate the process being developed by water users in Diamond Valley with the assistance of agencies. “The water users like the idea of a market-based system that provides ultimate flexibility in using water that’s best for their operation, does not promote waste, and allows quick sale, lease, trade, etcetera for water shares in times when needed—excess or drought.”

While all the particular details are being worked out, an advisory panel is making progress. Those leading the effort for the Diamond Valley hope to have a draft plan approved by all water rights holders and submitted to the State Engineer for feedback in October 2016. If all looks good, it’s on to the legislature with the start of sessions in February 2017.

“Even before Critical Management Area designation, there have been many efforts for local water users—primarily farmers—for many years to find local, grass-roots solutions to reduce pumping that will leave the local community intact while preserving our socio-economic stability,” Tibbitts said.

With this plan, the hope, according to Tibbitts, is that Diamond Valley can “Keep as many farming families farming as possible, albeit likely farming differently than the status quo today. We want to keep the same economic outputs from Diamond Valley even with less pumping, all while stabilizing the water table declines.”

In the same Nicholas Institute report detailing the blueprint for Diamond Valley, authors share an idea for another potential pilot site in Nevada—the Humboldt Basin. A more multifaceted project involving ground and surface water, the basin would require unbundling of its water rights in stages—an avenue representatives are exploring with the Nicholas Institute.

Young and other members of the Nicholas Institute say the frameworks used to create the blueprints for Diamond Valley and the Humboldt Basin have application elsewhere. The Nicholas Institute is now working with groundwater district managers in California, but many sites in other states could be test beds.

“This drought issue does not start and end in the West,” said Nicholas Institute director Tim Profeta, who is also involved in the project. “This same challenge is on the rise in other geographies where a similar method may be scaled and transitioned for use there—possibly even across jurisdictions.”