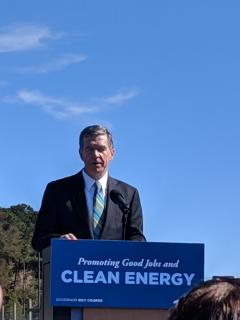 “The North Carolina Department of Environmental Quality is partnering in this effort and hopes that the outcome of this process may be rolled into the state’s proposed clean energy plan and used to meet the climate goals laid out by Gov. Cooper today.”

Bio:
Jen Weiss is a senior policy associate in the Climate and Energy Program at Duke’s Nicholas Institute for Environmental Policy Solutions. Her work focuses on financing mechanisms for renewable energy, and analyzes the impact of new energy policies, mandates, and programs on new and existing energy projects.

Quote:
“Climate policy in North Carolina just matured. The Executive Order announced today appears to be a pragmatic and comprehensive look at the levers of North Carolina government that can be used to mitigate the risks of climate change while embracing the economic opportunities available in the effort,” says Tim Profeta, director of Duke’s Nicholas Institute for Environmental Policy Solutions.

Bio:
Tim Profeta directs Duke’s Nicholas Institute and has worked for nearly two decades on climate policy, with a particular focus on the use of market forces to reduce greenhouse gas emissions. His recent work has focused on using flexible mechanisms to create climate regulations in the U.S. under the Clean Air Act and how the model of carbon regulation being developed in the U.S. could translate to other countries.

Note to broadcast editors: Duke provides an on-campus satellite uplink facility for live or pre-recorded television interviews, as well as a digital studio for interviews by Skype or Google Hangout. We are also equipped with ISDN connectivity for radio interviews. These services are usually available during normal business hours. Broadcast reporters should contact Erin McKenzie at (919) 613-3652 or erin.mckenzie@duke.edu to arrange an interview.