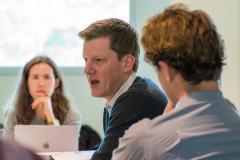 On a Friday afternoon in October, more than 40 Duke University students put off the start of their weekends to cram into the fifth-floor boardroom of Grainger Hall.

Boxes of pizza waited for them on the tables, but the prospect of a midday snack/early dinner wasn’t the reason they had gathered after a long of week of classes. They came to get their questions answered about how Congress makes environmental policy.

The ensuing two-hour discussion was the first of nine Policy Boot Camps hosted by the Nicholas Institute for Environmental Policy Solutions over the 2019–2020 academic year. The sessions were designed to give Duke students an opportunity to learn about environmental policy-making institutions—what they are, how they work, and how to engage them—through informal conversations with Nicholas Institute professionals.

“The time with the students was a blast,” said Tim Profeta, the Nicholas Institute’s director, who led the first boot camp. “The free-flowing conversation made it so much easier to share insights, and to ensure I was responding to the questions that were really on their mind. I hope they got as much out of it as I did.”

For that discussion, Profeta pulled from two decades of working with Congress—first as a staffer to former Connecticut Sen. Joseph Lieberman and now as a bridge to Duke’s world-class research to help inform policy making.

In the boot camps that followed, other Nicholas Institute professionals drew on their own experiences to delve into topics ranging from federal departments and agencies to green banks. Jackson Ewing, a Nicholas Institute senior fellow, talked about working with environmental ministries in China and Southeast Asian countries as part of a January session that he co-led with Energy Access Project Director Jonathan Phillips.

“Learning goes both ways in the Policy Boot Camps,” Ewing said. “The students are curious about the issues we’re working on, career trends in those spaces, and the routes we took to our current roles. As a presenter, it was illuminating to see what things the students grabbed onto the most, and hearing about their plans and ambitions gave me new ideas about where my field might be heading.”

The relaxed atmosphere kept the conversations flowing between the seasoned professionals and students. Conor Mulderrig, a master of environmental management (MEM) student in the Nicholas School of the Environment, said that helped put everyone in the room on an equal footing.

“The boot camps really gave me a chance to appreciate the level of discourse that my peers bring at the Nicholas School,” said Mulderrig, who is studying climate change policy. “It was fantastic to hear from respected experts, but the time devoted to follow-ups was often when I gained new perspectives on an issue.”

For both Mulderrig and fellow MEM student Gray Li, the boot camps presented a networking opportunity that led to assistantships with the Nicholas Institute.

In her studies, Li is focused on the economics of carbon pricing and how it could be used to address climate change. She described the boot camps as a great venue for hearing about specific topics that would not necessarily be covered in her classes.

“Going into those boot camp sessions as a first-year graduate student was very eye opening,” Li said. “It was a good opportunity for me to gain first-hand information on what it is like to be working in related fields, climate and carbon pricing for me in particular.”

After campus events were canceled in March because of COVID-19, the final scheduled session and a social hour for career advice were moved to Zoom video conferencing software. The pizza boxes in Grainger Hall may have been replaced by video and chat boxes on a computer screen, but the discussions still helped students get their environmental policy knowledge in shape.