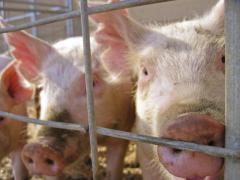 DURHAM, N.C. -- Capturing methane gas from hog farms and piping it into existing natural gas pipelines may be a cost-effective way to meet North Carolina's Renewable Energy and Energy Efficiency Portfolio Standard (REPS), according to a new Duke University study.

A modeling analysis by researchers at Duke's Nicholas Institute for Environmental Policy Solutions and the Duke Carbon Offsets Initiative compared individual farm and centralized approaches for meeting the swine mandate in the state's REPS. It found that electricity could be generated at costs of approximately 11 cents per kilowatt hour at individual farms and between 6 and 11 cents per kilowatt hour if hog farms were to use a central line to transport biogas for pipeline injection through an approach known as "directed biogas."

The analysis found that a network of farms in Duplin and Sampson counties, where swine farming is most concentrated, appear to be the best candidates for producing swine waste-derived energy.

The researchers note however, that cost projections were limited to costs of construction, equipment, operation and maintenance. Ultimate prices for electricity from swine waste would be affected by other costs not addressed in the study, such as business development.

"The intent of this report was to remove a lot of the guesswork from where and how to best pursue swine waste to energy," said Tatjana Vujic, director of the Duke Carbon Offsets Initiative and report co-author. "Duke's analysis also indicates that the costs of swine-based renewables aren't far off from other renewables. Basically, converting swine waste into energy is within reach."

Under a North Carolina law approved in 2007, utilities were supposed to get some of the electricity they sell -- .07 percent now and .20 percent by 2018 -- from hog waste each year. So far, little of the set-aside has been met.

This study provides a first step, the authors said, toward an informed strategy to increase swine gas energy production in the state. They found that of the approximately 2,126 swine farms in North Carolina, as few as 7 percent would need to participate to meet the REPS mandate.

The most cost-effective of four scenarios examined by the study would use a farm located near the natural gas pipeline to collect gas from nearby hog operations, process it, and then feed the biogas into the existing natural gas pipeline. To nearly double efficiency, farms would use new, covered digesters rather than existing lagoons to generate biogas.

In addition to the cost savings and income potential from renewable energy, the capture and destruction of swine waste-derived biogas could reduce the state's greenhouse gas emissions by as much as 1.37 million metric tons per year by 2018. New capture systems could also pave the way for system add-ons that would help farms improve their environmental performance, and possibly expand their operations.

"The potential to reduce greenhouse gases from North Carolina's swine sector is significant  -- meeting the REPS target alone would be the equivalent of taking 285,000 cars off the road each year," Vujic said. "What's more, the revenue from carbon offsets achieved by those emission reductions can be sold in markets such as California's cap-and-trade system, which represents additional income that could make pursuit of swine waste to energy even more attractive."

The authors caution that more work is needed to identify additional costs of developing  swine waste to energy as well as incentives that could bring its costs down before locking in on an actual price.

The study was funded by Duke Energy Carolinas and the Environmental Defense Fund. To read it, visit http://bit.ly/15K9ggi

Note to broadcast editors: Duke provides an on-campus satellite uplink facility for live or pre-recorded television interviews. We are also equipped with ISDN connectivity for radio interviews. Broadcast reporters should contact Scott Wells at (919) 660-1741 or James Todd (919) 681-8061 to arrange an interview.