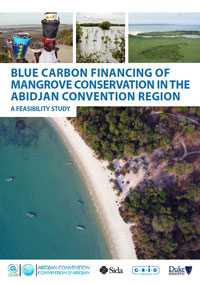 Coastal vegetated ecosystems such as mangrove forests, seagrass meadows, and salt marshes have long benefited coastal communities and fisheries, and in recent years have been recognized internationally for their significant capacity to sequester and store carbon (“blue carbon”)—at rates that surpass those of tropical forests. Yet these ecosystems are being converted rapidly. Current annual mangrove deforestation has been estimated to emit 240 million tons of carbon dioxide. For this reason, financing mechanisms to pay those tropical countries that have significant blue carbon resources to reduce greenhouse gas (GHG) emissions from deforestation have been explored as a means to fund mangrove conservation. This report by the United Nations Environment Programme, the Abidjan Convention Secretariat, and GRID-Arendal explores the potential of international carbon finance mechanisms to help fund mangrove conservation along the coast of West, Central, and Southern Africa that is covered by the Abidjan Convention—from the southern border of Mauritania to the northern border of Angola—and the scale of economic benefits that this conservation might provide for communities and countries in the region, including benefits not always recognized in traditional assessments or valuations. This report aims to increase knowledge about blue carbon stocks in West, Central, and Southern Africa and the steps that interested communities and countries in the region could take to secure international payments for their conservation and avoided GHG emissions.