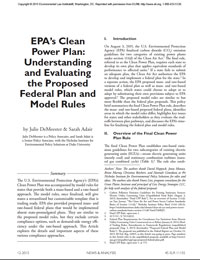 On August 3, 2015, the U.S. Environmental Protection Agency (EPA) finalized carbon dioxide (CO2) emission guidelines for two categories of existing power plants under section 111(d) of the Clean Air Act. The final rule, referred to as the Clean Power Plan, requires each state to develop its own plan that applies equivalent standards of performance to affected units. If a state fails to submit an adequate plan, the Clean Air Act authorizes the EPA to develop and implement a federal plan for the state. In a separate action, the EPA proposed mass- and rate-based versions of a federal plan as well as mass- and rate-based model rules, which states could choose to adopt or to adapt by substituting their own provisions subject to EPA approval. The proposed model rules are similar to but more flexible than the federal plan proposals. This article in the Environmental Law Reporter summarizes the final Clean Power Plan rule, describes the mass- and rate-based proposed federal plans, identifies areas in which the model rules differ, highlights key issues for states and other stakeholders as they evaluate the tradeoffs between plan pathways, and discusses the EPA’s timeline for finalizing the federal plan and model rules.