Effects of Technology Assumptions on US Power Sector Capacity, Generation and Emissions Projections: Results from the EMF 32 Model Intercomparison Project 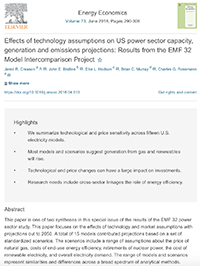 This article is one of two syntheses in a special issue in the journal Energy Economics on the EMF 32 study, a major modeling study of the electric power sector's emissions in various policy intervention scenarios. This article focuses on the effects of technology and market assumptions with projections out to 2050. A total of 15 models contributed projections based on a set of standardized scenarios. The scenarios include a range of assumptions about the price of natural gas, costs of end-use energy efficiency, retirements of nuclear power, the cost of renewable electricity, and overall electricity demand. The range of models and scenarios represent similarities and differences across a broad spectrum of analytical methods. One similarity across almost all results from all models and scenarios is that the share of electricity generation and capacity fueled by coal shrinks over time, although the rate at which coal capacity is retired depends on the price of natural gas and the amount of electricity that is demanded. Another similarity is that the models project average increases in natural gas power generating capacity in every scenario over the 2020–2050 period, but at lower average annual rates than those that prevailed during the 2000–2015 period. The projections also include higher gas capacity utilization rates in the 2035–2050 period compared to the 2020–2050 period in every scenario, except the high gas price sensitivity. Renewables capacity is also projected to increase in every scenario, although the annual new capacity varies from modest rates below the observed 2000–2015 wind and solar average to rates more than three times that high. Model estimates of carbon dioxide emissions largely follow from the trends in generation. Low renewables cost and low gas prices both result in lower overall carbon dioxide emission rates relative to the 2020–2035 and 2035–2050 reference. Both limited nuclear lifetimes and higher demand result in increased carbon dioxide emissions.