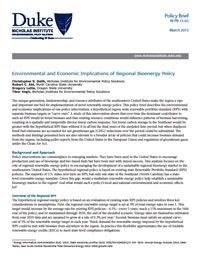 The unique generation, landownership, and resource attributes of the southeastern United States make the region a ripe and important test bed for implementation of novel renewable energy policy. This policy brief describes the environmental and economic implications of one policy intervention: a hypothetical region-wide renewable portfolio standard (RPS) with separate biomass targets or “carve-outs.” A study of this intervention shows that over time the dominant contributor to such an RPS would be forest biomass and that existing resource conditions would influence patterns of biomass harvesting, resulting in a spatially and temporally diverse forest carbon response. Net forest carbon storage in the Southeast would be greater with the hypothetical RPS than without it in all but the final years of the modeled time period, but when displaced fossil fuel emissions are accounted for net greenhouse gas (GHG) reductions over the period could be substantial. The methods and findings presented here are also relevant to a broader array of policies that could increase biomass demand from the region, including pellet exports from the United States to the European Union and regulation of greenhouse gases under the Clean Air Act.