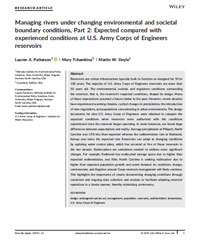 Reservoirs are critical infrastructure typically built to function as designed for 50 to 100 years. The majority of U.S. Army Corps of Engineers reservoirs are more than 50 years old. The environmental, societal, and regulatory conditions surrounding the reservoir, that is, the reservoir's expected conditions, shaped its design. Many of these expectations assumed a future similar to the past. However, recent decades have experienced warming climates, cyclical changes in precipitation, the introduction of new regulations, and populations concentrating in urban environments. The design documents for nine U.S. Army Corps of Engineers were obtained to compare the expected conditions when reservoirs were authorized with the conditions experienced since the reservoir began operating. In some instances, we found large differences between expectations and reality. Average precipitation at Philpott, North Carolina was 15% less than expected whereas the sedimentation rate at Redmond, Kansas was twice the expected rate. Reservoirs can adapt to changing conditions by updating water control plans, which has occurred at five of these reservoirs in the last decade. Reallocations are sometimes needed to address more significant changes. For example, Redmond has reallocated storage space due to higher than expected sedimentation, and Falls, North Carolina is seeking reallocation due to higher than expected population growth and water demand. As conditions change, controversies and litigation around Corps reservoir management will likely continue. This highlights the importance of clearly documenting changing conditions through consistent and ongoing data collection and analysis to facilitate adapting reservoir operations in a timely manner, thereby minimizing controversy. An interactive tool was developed for each condition: https://nicholasinstitute.duke.edu/reservoir-comparison/

See the Reservoir Series for related publications and interactive tools.