What’s the Damage from Climate Change? 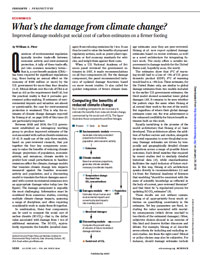 This contribution to Science's Perspectives underscores the importance of work to update estimates of the cost of carbon dioxide emissions, a cost that pervades government policy making. It explains the efforts of an interagency group charged with improving estimates of the so-called social cost of carbon (SC-CO2)—the dollar value of damage associated with 1 ton of additional emissions—and hence its equivalent, the benefit of avoided damage. It explains that in 2017 a U.S. National Academy of Science panel recommended use of updated damage models that translate climate change into impacts measured against the baseline economic activity and population. An improved damage model architecture for the United States has produced new estimates: 3 degrees Celsius of warming would lead to a loss of ~2 percent of U.S. gross do­mestic product; 6 degrees Celsius of warming would lead to a ~6 percent loss. But the real value of the new model architecture is enhanced credibility for future benefit es­timates built on it and the architecture’s capacity to incorporate new studies and additional economic sectors—a capacity that speaks directly to National Academy of Sci­ences recommendations that modeling be “consistent with the state of scientific knowledge as re­flected in the body of current, peer-reviewed literature” and that there be “a regularized process for updating SC-CO2 estimates.” The new modeling effort has several caveats, and three other components needed to compute the SC-CO2 need upgrades. Nevertheless, the emphasis of conservative governments, including the cur­rent one, on cost-benefit analysis can lead these governments to support envi­ronmental regulation.