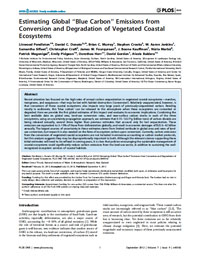 Recent attention has focused on the high rates of annual carbon sequestration in vegetated coastal ecosystems—marshes, mangroves, and seagrasses—that may be lost with habitat destruction. Relatively unappreciated, however, is that conversion of these coastal ecosystems also impacts very large pools of previously-sequestered carbon. Residing mostly in sediments, this ‘blue carbon’ can be released to the atmosphere when these ecosystems are converted or degraded. Here we provide the first global estimates of this impact and evaluate its economic implications. Combining the best available data on global area, land-use conversion rates, and near-surface carbon stocks in each of the three ecosystems, using an uncertainty-propagation approach, we estimate that 0.15–1.02 billion tons of carbon dioxide are being released annually, several times higher than previous estimates that account only for lost sequestration.