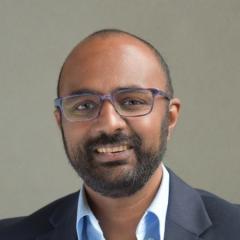 Arvin Ganesan joined Apple to lead energy and environmental policy in November 2017. He formerly served as vice president for federal policy at Advanced Energy Economy (AEE), where he led efforts to support policies that enable rapid growth of businesses that develop and use the advanced energy technologies from 2013 to 2014. Before joining AEE, he worked with the U.S. Environmental Protection Agency (EPA), serving first as associate administrator for Congressional and Intergovernmental Relations, a role in which he was primary political adviser to the EPA Administrator Lisa Jackson on Congressional and political strategy. He later served as the agency’s deputy chief of staff, overseeing the development, rollout, and communications of environmental policy. Prior to his tenure with the EPA, Ganesan was the primary adviser to U.S. Senator Frank Lautenberg (D-NJ) on all energy and environmental matters, including Clean Air Act and climate change work, toxic chemicals, and national water policy. Ganesan holds a master’s degree in public administration from The George Washington University.