We’ve all seen the headlines. Around the world, conflict and crisis are prompting a record spike in the number of people who are forcibly displaced from their homes. With millions on the move, we need cross-sector solutions to address the close connections between the well-being of forcibly displaced persons, their host communities and the environment they share.

The numbers paint a striking picture. 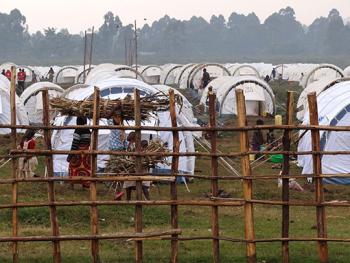 Every day, more than 28,000 people around the world are uprooted from their homes, fleeing conflict, violence and persecution. In total, at this writing, an unprecedented 65.6 million people are displaced globally—including 22.5 million refugees who have fled across international borders and another 40.3 million internally displaced people (IDPs), who are displaced within their own countries.

And forced displacement isn’t just a “big” problem—it’s also a long-term one. On average, refugees have spent about 10 years away from home. But for the many refugees in protracted situations (displaced for more than five years), this average increases to about 21 years.

Displacement and the Environment

With forced displacement at a record high, the movement of such large numbers of people has significant and immediate impacts on individuals, communities and the environment that sustains us all.

Particularly in humanitarian emergencies, many displaced people rely on their surrounding environments for survival—as a source of food, water, shelter, energy and livelihoods. But when refugees or IDPs settle, new host communities suddenly (and often unexpectedly) face an increase in population. This spike can drive competition for natural resources, placing stress on the environment and jeopardizing the well-being of the people who depend upon it. Competition for scarce resources, either real or perceived, can also spur harmful friction between displaced persons and their host communities.

Often, these effects are compounded by the fact that many areas where refugees or IDPs settle are already marginalized and fragile. Particularly when natural resources are scarce or vulnerable, additional strain and unsustainable use can lead to significant environmental degradation with lasting impacts for the planet. And as we know, what’s bad for the environment is also ultimately bad for people.

For the forcibly displaced, an unhealthy environment can complicate and heighten the many vulnerabilities they face. Poor water quality can be a breeding ground for disease. Deforestation may strain fuel supplies and force women and children to travel further to find firewood, putting them at risk of violence. Overcrowding can lead to poor sanitation, which is bad for both health and rivers. And competition for scarce resources, like agricultural land, firewood or water, can stoke tensions and resentment, compromising local stability. The list goes on. And because displacement often occurs for long periods, these consequences can multiply over time. 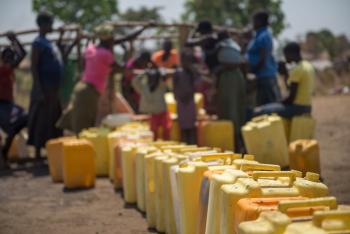 Although the many connections between people and the planet are evident in the story of forced displacement, why consider the environment in our responses? And more importantly: how? The answers to these questions are less obvious.

With the safety and welfare of millions at risk, humanitarian responders often view environmental considerations as longer-term and therefore able to take a back seat to urgent, life-saving services. Yet, failure to consider the environment in displacement responses can quickly exacerbate social tensions and undermine the progress of humanitarian and development efforts.

But, using this knowledge in real time isn’t easy. Although UNHCR and other organizations have developed guidance on incorporating environmental concerns into displacement response, there are still many challenges. Further efforts are needed to support the rapid design of evidence-based interventions that are responsive to the unique needs of different social, cultural and environmental contexts. With roughly 76 percent of refugees living outside of camp settings, responses are increasingly complex and require integrated planning and action. Also, while current guidelines typically focus on guarding against environmental impact, there are often overlooked opportunities to consider how environmental assets and interventions could actually strengthen humanitarian response and development interventions.

Together, The Center for Global Development and The Nature Conservancy explored solutions to these challenges with a new idea: Refugee Action for People and the Planet (RAPP) Labs.

RAPP Labs supported local and international organizations in meeting their immediate goals for refugees, IDPs and host communities, while also integrating environmental interventions and assets. By curating place-specific evidence and facilitating in-country dialogues via a ‘rapid lab’ approach, this process assisted humanitarian organizations with realistically building environmental considerations into their proposals and actions in real time.

“The goal of a RAPP Lab would be to quickly put what we know about human-environment linkages in a forced displacement situation into action, enabling organizations to integrate environmental considerations into planned or ongoing humanitarian work,” says Dr. Cindy Huang of the Center for Global Development.

“Given that humanitarian solutions have to respond to highly specific contexts,” adds Dr. Heather Tallis of The Nature Conservancy, “we developed a concept for rapidly meeting people where they are and creating a fine-tuned response for each case.”

From Idea to Action

So, what would a RAPP Lab look like in practice? The case of Uganda offers a relevant example.

Often viewed as one of the most progressive refugee-hosting states when it comes to policy, Uganda allows refugees to work and even offers them a plot of land. But with the recent and rapid arrival of more than one million South Sudanese refugees, resources such as wood and water are becoming strained. The growing resource scarcity is driving community tensions and threatening additional environmental degradation with possible impacts on food security. In Uganda, the RAPP Lab will provide humanitarian and development actors on the ground with information and tools that can help them rapidly integrate environmental considerations into the response effort.

The task at hand is considerable: how do we identify realistic, context-specific solutions that deliver sustainable results for forcibly displaced persons, their host communities and the environment?

There will be no silver bullets, but the scale and complexity of today’s global forced displacement crisis demand that we think creatively to test and scale integrated solutions. The well-being of both people and the planet depend on it.

Photo at top: A small child carries a jerrycan of water through the Bidi Bidi camp for South Sudanese refugees in northern Uganda. Photo courtesy of Trocaire.