In May 2018, the Bridge Collaborative joined one of our Spark Award Champions in Western Uganda at a multi-sectoral workshop to advance sustainable development. Read on to find out how—with a small spark and some creative collaboration—we can build real momentum for cross-sector impact.

A representative from Total Oil, the head of a chimpanzee sanctuary and a Ugandan government official stand together in front of a wall of sticky notes, pitching an idea to a scientist masquerading as a policewoman.

This isn’t the start of a joke. This is day two of a groundbreaking multi-sectoral workshop, facilitated by the Bridge Collaborative and the Wildlife Conservation Society. For the first time in the country’s history, 60 stakeholders have come together from the Government of Uganda, extractive industries, civil society, international NGOs, and the donor community to develop collaborative solutions to advance economic development in a way that holistically supports healthy communities and ecosystems. This is the story of how a $10,000 seed grant led to a national effort now being led by the Prime Minister of Uganda. 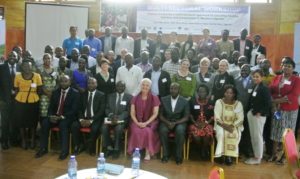 In Western Uganda, fossil fuel exploration and planned extraction are shaping the way humans and nature interact. Oil and gas deposits were discovered here in 2006, presenting both great economic opportunities and significant threats to wildlife, property rights and human health. Industrial activity in the area promises to catalyze the improvement of roads and services and create jobs. But at the same time, it risks increasing pressure on the region’s forests, wildlife and water resources, which are integral to local livelihoods, food security, nutrition and health, as people from across Uganda come hoping for jobs, needing land, building materials, fuel and farms to live. The development of more hydropower dams—several already exist in Uganda—present similar complex challenges.

Helping businesses avoid the unintended impacts of economic development is why the Wildlife Conservation Society (WCS) helped found the Business and Biodiversity Offsets Program, with support from the United States Agency for International Development (USAID). Established in 2004, the Offsets Program aims to help extractive industries mitigate negative environmental and social impacts. With support from the program, Total Oil and the Chinese oil company CNOOC created an advisory committee, which included representation from WCS and the Ugandan Government. Not only did the committee embody the willingness of the oil and gas industries to collaborate on minimizing the negative impacts of extraction, but it quickly affirmed that there was no single-sector solution to achieving a win-win scenario for both socio-economic development and the natural world.

From a Spark Award in London to a Workshop in Hoima 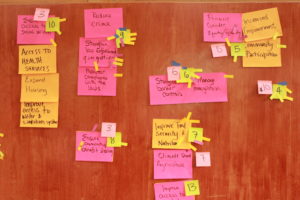 In October 2017, the Bridge Collaborative held a global launch event in London. As part of this, the Collaborative hosted the Bridge Spark Challenge, a live funding competition designed to help people quickly share and develop ideas to advance bold thinking for cross-sector evidence use and impact. Together, the attendees joined forces to brainstorm and submit their proposals—among them was David Wilkie, Director of Conservation Measures for WCS. His pitch? The oil boom in Uganda needs a multi-sectoral solution. The Spark Challenge prompted David, during the launch event, to take a fuzzy concept he’d been dreaming about, and quickly put it into a concrete concept. Alongside two others, David was awarded USD$10,000 to incubate his idea of a collaborative stakeholder workshop in Uganda, as well as the opportunity to work with Bridge staff to test, integrate and apply elements of the Bridge Collaborative Practitioner’s Guide.

True to its name, the funding sparked the ignition for WCS to leverage match funding from the African Biodiversity Collaborative Group, as well as in-kind support from the Uganda Biodiversity Fund (UBF). The USAID Africa Bureau also committed funds to support post-workshop activities.

Between them, WCS, USAID and UBF sent over 100 invitations to contacts in various sectors and received 60 participants, resulting in the biggest and most high-profile cross-sectoral workshop Uganda has ever seen. Participants included representatives from various government ministries, agencies and departments, members of academia, civil society organizations, parliamentarians, development agencies (including US Ambassador to Uganda Deborah Malac), and the private sector.

During the workshop, six groups were formed to develop Desired Outcomes for each sector along with a list of Issues and Action Items that the sector needs to focus on to improve multi-sector outcomes. These Action Items and Issues were linked to a Policy Gap Analysis and a set of recommendations were developed. Each group then developed a list of what is and is not being done in their sector to mitigate social and environmental impacts from oil and gas development in order to fill the necessary gaps. The six groups were: 1. Conservation, 2. Land Tenure, Ownership, and Resettlement, 3. Law Enforcement and Compliance Monitoring, 4. Policy Implementation, 5. Planning, and 6. Research.

And that is how, on 22 May 2018, a representative from Total Oil, the head of a chimpanzee sanctuary and a local government official came to stand together in front of a wall of sticky notes, pitching an idea to the Bridge Collaborative’s very own Christine Jacobs who was masquerading as a policewoman. This activity was one of many aimed at revealing the common priorities between sectors in the room, and involved the participants writing down their organizational interests on sticky notes and ranking them. If anyone wanted to make a change on the wall, they had to get permission from the ‘policewoman’ by reaching consensus with at least one other participant that the issue was important.

As well as offering practical break-out sessions and structured discussions, the workshop provided informal opportunities for people to share stories—tales of the unintended consequences of development. David Wilkie shared the story of the Ruaha River in Tanzania, a lifeline for communities and wildlife that now dries up for months every year. This is because of a complex series of consequences born from a well-intentioned scheme by the government to devolve land rights to local communities, and the downstream effects this had on nomadic groups, and the growth of industrial-scale irrigated rice fields.

Another tale, closer to home for those at the workshop, came from the shores of Lake Albert. When the Ministry in charge of infrastructure authorized Total and CNOOC to upgrade a bridge to support their heavy trucks, they couldn’t have foreseen the impact this would have on tilapia fisheries. In opening up the river crossing to vehicles carrying machinery for the rigs, the bridge also allowed refrigerated lorries to access Lake Albert’s shores. Suddenly, a local tilapia fishery became national. With the promise of good business, many more fishermen began to take fish from the lake, causing a short-term economic boom followed by the inevitable bust.

Participants reported that these discussions highlighted how easily one sector’s success can hinder another’s, and the need for proactive cross-sectoral collaboration in mitigating this.

The unprecedented engagement in the Hoima workshop has created momentum, which is now being driven by the Albertine Stakeholders Forum and led by the Ugandan Prime Minister. Not only will the Forum advance the workshop’s outcomes, but it is working to secure participation from the agricultural and health sector, which weren’t initially well-represented in Hoima.

“The team was lucky enough to get an award from the Bridge Collaborative that let me leverage additional funding and convince everyone that the workshop was a good idea”, says David Wilkie of WCS. “Though I, with Bridge and others, helped facilitate the workshop, this is a Ugandan process, that is being led and carried forward by Ugandans.”

“With a little bit of seed money, cool things can happen. In this case, champions in Uganda used the opportunity to launch a national program to ensure that much needed economic development investments benefit families, the environment and the nation.”