This content is excerpted from the GEMS Phase I Report: Oyster Reef Restoration.

Metrics to monitor and report on socioeconomic outcomes of oyster reef restoration were developed for the Gulf of Mexico in phase I of the GEMS project.

Local workshop participants brainstormed an initial list of metrics for socioeconomic outcomes of oyster reef restoration relevant to their communities, and the list was expanded through conversations with additional stakeholders and literature review.  The metrics list was refined at a regional workshop in spring 2019 and finalized with feedback from the advisory council in fall 2019.

The final list of metrics is organized into a matrix based on scale (project scale or county to regional scale) and by tier (1 or 2). Scale refers to the scope of the data collection. Project scale metrics could feasibly be measured and reported by individual projects; regional or county scale metrics would likely need to be modeled for a suite of projects by a third party. Tier refers to the ease of data collection; tier 1 metrics are relatively low-effort and easy to measure, while tier 2 metrics would require additional effort and expertise for data collection. Metrics are also flagged by the outcome category (yellow boxes) corresponding to outcomes in the oyster reef restoration ecosystem service logic model.

We considered metrics related to human health and resilience, but did not include any in the final metrics list due to data availability and attribution issues.  More information about these categories is included at the end of this document.

More information about each recommended metric follows the metrics matrix. 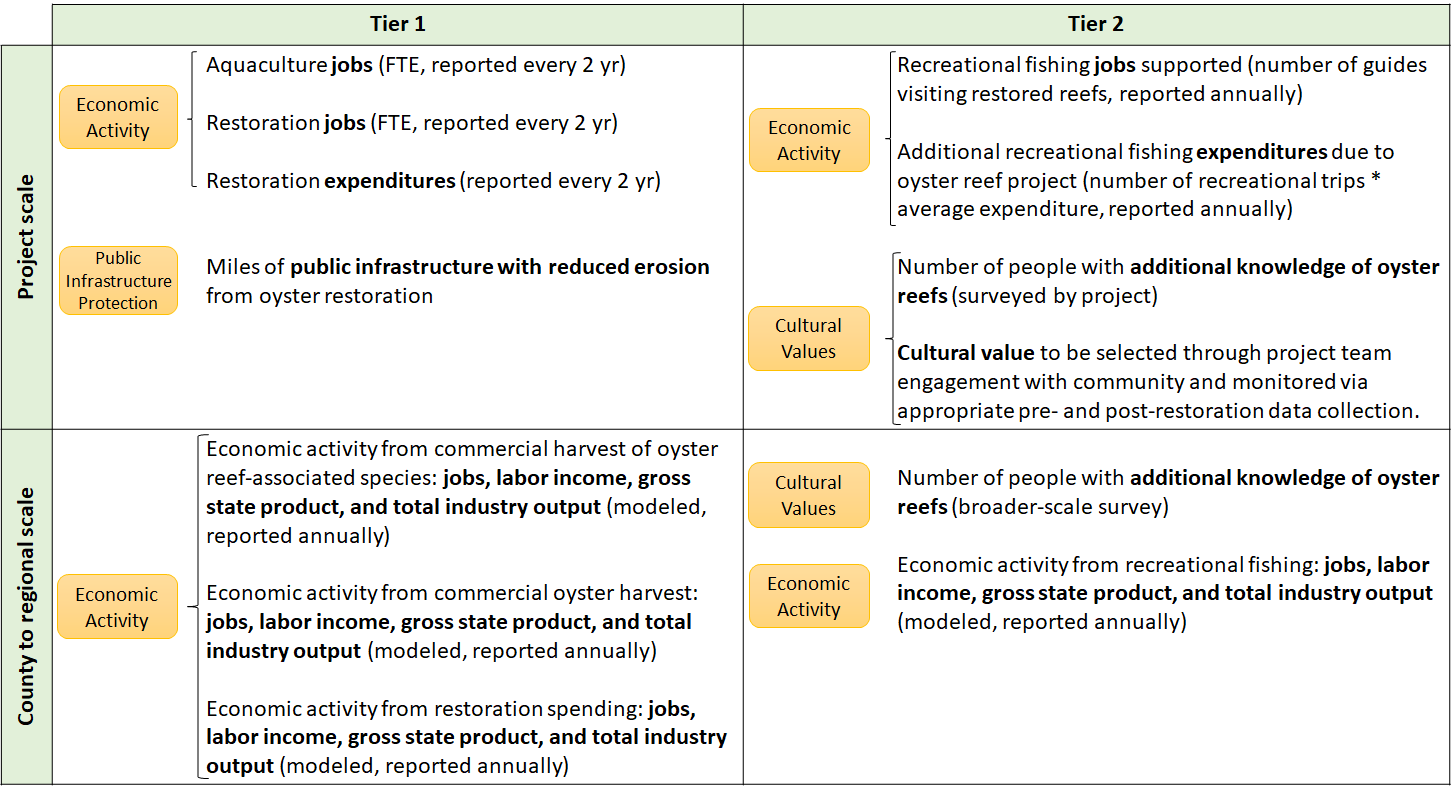 The number of jobs directly supported by an oyster aquaculture project during operation (jobs supported through design and construction would be included in the “restoration jobs” metric below). This metric is only relevant for oyster aquaculture projects and should be known by the organization implementing the project. This metric is reported as full-time employee equivalents every two years.

The number of jobs directly supported by the restoration project. This includes project design, construction, and monitoring. The organization implementing the project should have this information. This metric is reported as full-time employee equivalents every two years.

The total amount of money spent on the restoration project. This metric is reported every two years and can be taken directly from the project budget.

Miles of public infrastructure with reduced erosion from oyster restoration

All tier 1 county to regional scale metrics would likely be modeled by a third party using available county- or state-level data. The modeling approach is technically referred to as “input-output” but is commonly known as economic impact analysis (EIA). EIA measures the change in economic activity (e.g. jobs, income, taxes, etc…) given the implementation of a project, such as oyster reef restoration. Below are direct economic activities, associated with oyster reef restoration, that lead to broader impacts that can be modeled (with EIA).

Jobs, labor income, gross state product, and total industry output would be modeled annually based on the money spent on restoration projects in the county or state.

Number of people with additional knowledge of oyster reefs

This metric would be assessed by the project through pre- and post-engagement surveys with volunteers, students, or other visitors to the project site. It would be reported once at the conclusion of the project. Surveys should include questions about the cultural importance of oysters, local uses of oysters, and oyster reefs’ contributions to a healthy estuarine system in order to assess how visitors’ oyster-related knowledge contributes to their sense of place and understanding of the community’s ties to oysters.

Jobs, labor income, gross state product, and total industry output would be modeled annually at a county to regional level. Angler surveys would be conducted to account for the difference in activity associated with a restoration project, which would then be used as input into the economic impact analysis (see Texas Half Moon Reef example [PDF]).

Number of people with additional knowledge of oyster reefs

This metric would be measured through a broader (county, state, or regional) survey administered by a third party to assess the influence of oyster reef restoration projects in the area on residents’ knowledge of oyster reefs, beyond those people who directly interact with the projects through volunteering or educational activities. The survey would be initially administered prior to any extensive oyster reef restoration activity, and then repeated after several oyster reef restoration projects are completed. The survey should include questions about the cultural importance of oysters, local uses of oysters, and oyster reefs’ contributions to a healthy estuarine system in order to assess how residents’ oyster-related knowledge contributes to their sense of place and understanding of the community’s ties to oysters.

Notes on health and resilience metrics

One socioeconomic outcome in the logic model, human health, does not have any related metrics in the final list. While we considered health-related metrics such as additional nutrition for subsistence fishers provided by wild-caught seafood, reduced stress from physical activity during oyster restoration, and whether oyster restoration increased the number of protein sources regularly consumed by a community, we concluded that, with existing data, there is no way to attribute measures of health gathered at the state level or in national surveys to oyster reef restoration. Health changes would be intensive to measure locally, and even local measurements would be difficult to attribute specifically to oyster reef restoration. Therefore, health metrics are not on the final list.

We also considered several metrics related to resilience, including diversity of job options, income sources, and diet diversity. However, data for these metrics are not generally available, and they may not be relevant indicators of resilience in a developed country context. One metric included in the final list, public infrastructure protection, is relevant to the resilience of communities in the Gulf of Mexico.