Getting to Yes: Internal Preparations—State Carbon Trading Checklist for a Meeting with the Governor 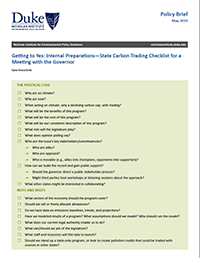 Public attention focuses on a policy once a governor makes a formal announcement and sets the debate in motion. However, much of the work happens before that moment, in conversations among state officials and their staff, and with key stakeholders. This memo is intended to support the work of “getting to yes” on a policy—in this case, a declining cap (and trade) program to reduce carbon dioxide emissions—once internal leadership has decided it is worth exploration. The memo reflects conversations with representatives of about a dozen states, including those that have capped carbon pollution, those that are in the process of doing so, and those that see this as a potential policy solution going forward.

Part One of this memo tackles the political case for action on a carbon dioxide cap-and-trade program. Part Two describes the practical, nuts-and-bolts considerations to make before a policy announcement, to anticipate questions about design and legal authority, and to rally critical state and third-party resources.