Maternal Transfer of Nanoplastics to Offspring in Zebrafish (Danio Rerio): a Case Study With Nanopolystyrene 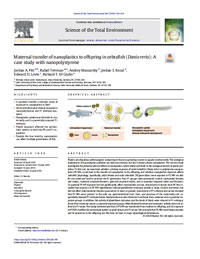 Plastics are ubiquitous anthropogenic contaminants that are a growing concern in aquatic environments. The ecological implications of macroplastics pollution are well documented, but less is known about nanoplastics. The current study investigates the potential adverse effects of nanoplastics, which likely contribute to the ecological burden of plastic pollution. To this end, we examined whether a dietary exposure of adult zebrafish (Danio rerio) to polystyrene nanoparticles (PS NPs) could lead to the transfer of nanoplastics to the offspring, and whether nanoplastics exposure affects zebrafish physiology. Specifically, adult female and male zebrafish (F0 generation) were exposed to PS NPs via diet for one week and bred to produce the F1 generation. Four F1 groups were generated: control (unexposed females and males), maternal (exposed females), paternal (exposed males), and co-parental (exposed males and females). Co-parental PS NP exposure did not significantly affect reproductive success. Assessment of tissues from F0 fish revealed that exposure to PS NPs significantly reduced glutathione reductase activity in brain, muscle, and testes, but did not affect mitochondrial function parameters in heart or gonads. Assessment of F1 embryos and larvae revealed that PS NPs were present in the yolk sac, gastrointestinal tract, liver, and pancreas of the maternally and coparentally exposed F1 embryos/larvae. Bradycardia was also observed in embryos from maternal and co-parental exposure groups. In addition, the activity of glutathione reductase and the levels of thiols were reduced in F1 embryos/ larvae from maternal and/or co-parental exposure groups.Mitochondrial function and locomotor activity were not affected in F1 larvae. This study demonstrates that (i) PS NPs are transferred from  mothers to offspring, and (ii) exposure to PS NPs modifies the antioxidant system in adult tissues and F1 larvae. We conclude that PS NPs could bioaccumulate and be passed on to the offspring, but this does not lead to major physiological disturbances.