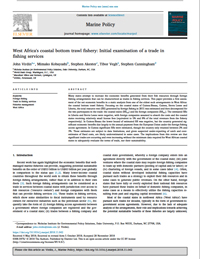 Many states attempt to increase the economic benefits generated from their fish resources through foreign fishing arrangements that can be characterized as trades in fishing services. This paper provides a first assessment of the net economic benefits in a static analysis from one of the oldest such arrangements in West Africa: the coastal bottom trawl fishery. Focusing on the coastal states of Guinea-Bissau, Guinea, Sierra Leone and Liberia, the total resource rent (RR) generated by foreign fishing in 2015 was estimated and then decomposed for the two participants in the trade: the coastal states (RRCS) and the foreign companies (RRFC). The estimated RRs in Liberia and Sierra Leone were negative, with foreign companies assumed to absorb the costs and the coastal states receiving relatively small license fees (equivalent to 5% and 8% of the total revenues from the fishery respectively). In Guinea-Bissau the lower bound of estimated RR was negative, but the country generated significant economic benefits due largely to the annual payment from the European Union under the foreign fishing access agreement. In Guinea significant RRs were estimated, though the country only retained between 2% and 3%. These estimates are subject to data limitations, and given suspected under-reporting of catch and overestimates of fixed costs, are likely underestimated in some cases. The implications from this review are that significant trades are occurring and even increasing without the minimum data required for West African coastal states to adequately evaluate the terms of trade, nor their sustainability.