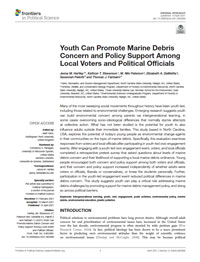 Many of the most sweeping social movements throughout history have been youth-led, including those related to environmental challenges. Emerging research suggests youth can build environmental concern among parents via intergenerational learning, in some cases overcoming socio-ideological differences that normally stymie attempts at collective action. What has not been studied is the potential for youth to also influence adults outside their immediate families. This study based in North Carolina, USA, explores the potential of today's young people as environmental change-agents in their communities on the topic of marine debris. Specifically, this evaluation examines responses from voters and local officials after participating in youth-led civic engagement events. After engaging with a youth-led civic engagement event, voters, and local officials completed a retrospective pretest survey that asked questions about levels of marine debris concern and their likelihood of supporting a local marine debris ordinance. Young people encouraged both concern and policy support among both voters and officials, and that concern and policy support increased independently of whether adults were voters or officials, liberals or conservatives, or knew the students personally. Further, participation in the youth-led engagement event reduced political differences in marine debris concern. This study suggests youth can play a critical role addressing marine debris challenges by promoting support for marine debris management policy, and doing so across political barriers.