Disclaimer: The data used in this tool have not been reviewed by the U.S. Army Corps of Engineers and does not extend beyond September 30, 2015. The tool should be used for academic purposes only as it is continually being improved. A final version of the tools is planned by the U.S. Army Corps of Engineers in the future, and should be considered the authoritative source once it is launched. It is best viewed in Chrome, Firefox, Microsoft Edge, and Safari browsers. It does not work with Internet Explorer.

How to Use This Tool

The map shows the location of U.S. Army Corps of Engineers reservoirs using provisional, unreviewed data up to September 30, 2015. Use the grey sidebar on the left to change the legend and filter reservoirs displayed on the map. Click on any reservoir in the map to see analysis results for that reservoir in the tabbed panels below. Change the time period for the analysis by typing in a year and clicking the submit (option located below the tabbed panels). Short descriptions of each analysis are provided within the tab.

Operational targets (also known as rule curves or guide curves) are the management goals for reservoir levels throughout a year as described in publicly discoverable and accessible water control plans. Further details are contained in the Nicholas Institute for Environmental Policy Solutions report, Creating Data as a Service for U.S. Army Corps of Engineers Reservoirs.

Over Under displays the lake elevation relative to the operational target. Click here for more information:

Operational departures refer to the difference between the operational target (OT) and actual reservoir levels. The purpose of a reservoir is to store and redistribute water throughout the year or between years, essentially smoothing the variability of precipitation patterns and attempting to match them with the water needs of the region. For example, during dry periods reservoir drawdowns will occur to meet water demands as less water is flowing into the reservoir. Similarly, during wet periods, the flood control pool will fill to contain the extra water, releasing that water over time. Thus, it is expected that there will be periods when reservoir levels are over or under the OT.

We quantify operational departures as the difference between the OT and actual reservoir levels for each day in the period of record. Reservoir elevations are not comparable between reservoirs because each reservoir has a different topography and volume. However, reservoir volume is linked to elevation through area capacity tables. Thus, operational departures were calculated as a percentage of the OT storage for each day: 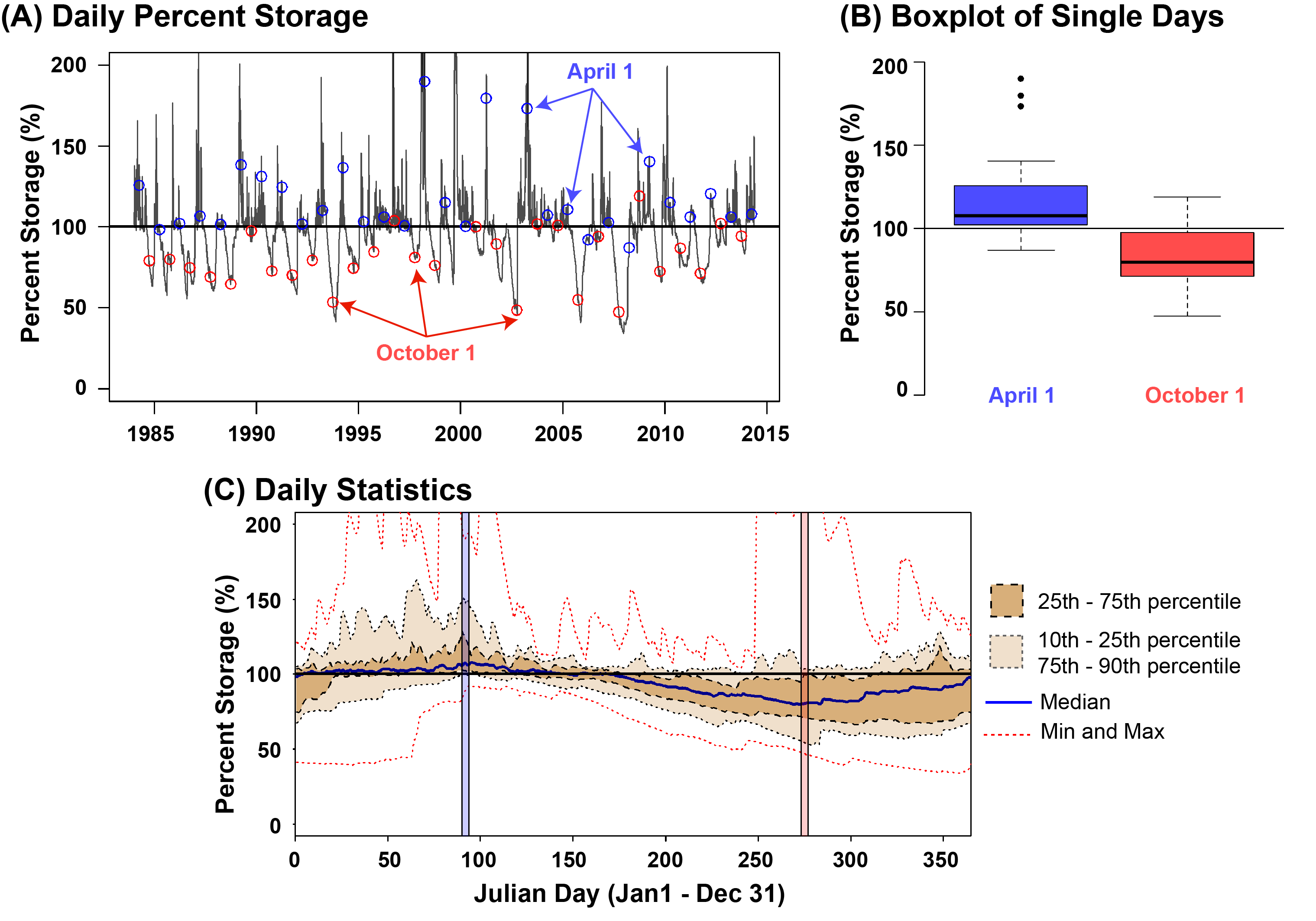 Annual operational departures over time can be analyzed by applying the concept of flow duration curves, which is a curve quantifying the cumulative percent of time a specified streamflow is equaled or exceeded during a given period. This concept can be modified to display the percent of time the operational target volume is equaled or exceeded within a typical year by calculating the cumulative frequency of departures. Here we calculate the 10th, 25th, 50th, 75th and 90th FDC, with the median reflecting reservoir variability within a “typical” year. The conceptual framework for an ‘expected’ storage duration curve (SDC) would be for the reservoir to remain near 100% for much of the period of record, indicating a small percentage of time with reservoir levels off target. Flood control reservoirs would be expected to have a more extreme tail above the OT as the flood control pool fills to accommodate flood events, while withdrawals for water supply or chronic droughts would increase the amount of time below the OT. Reservoirs spending substantial time off the OT would have a FDC displaced above the OT if consistently storing more water than targeted, and below if depleted more often than targeted. 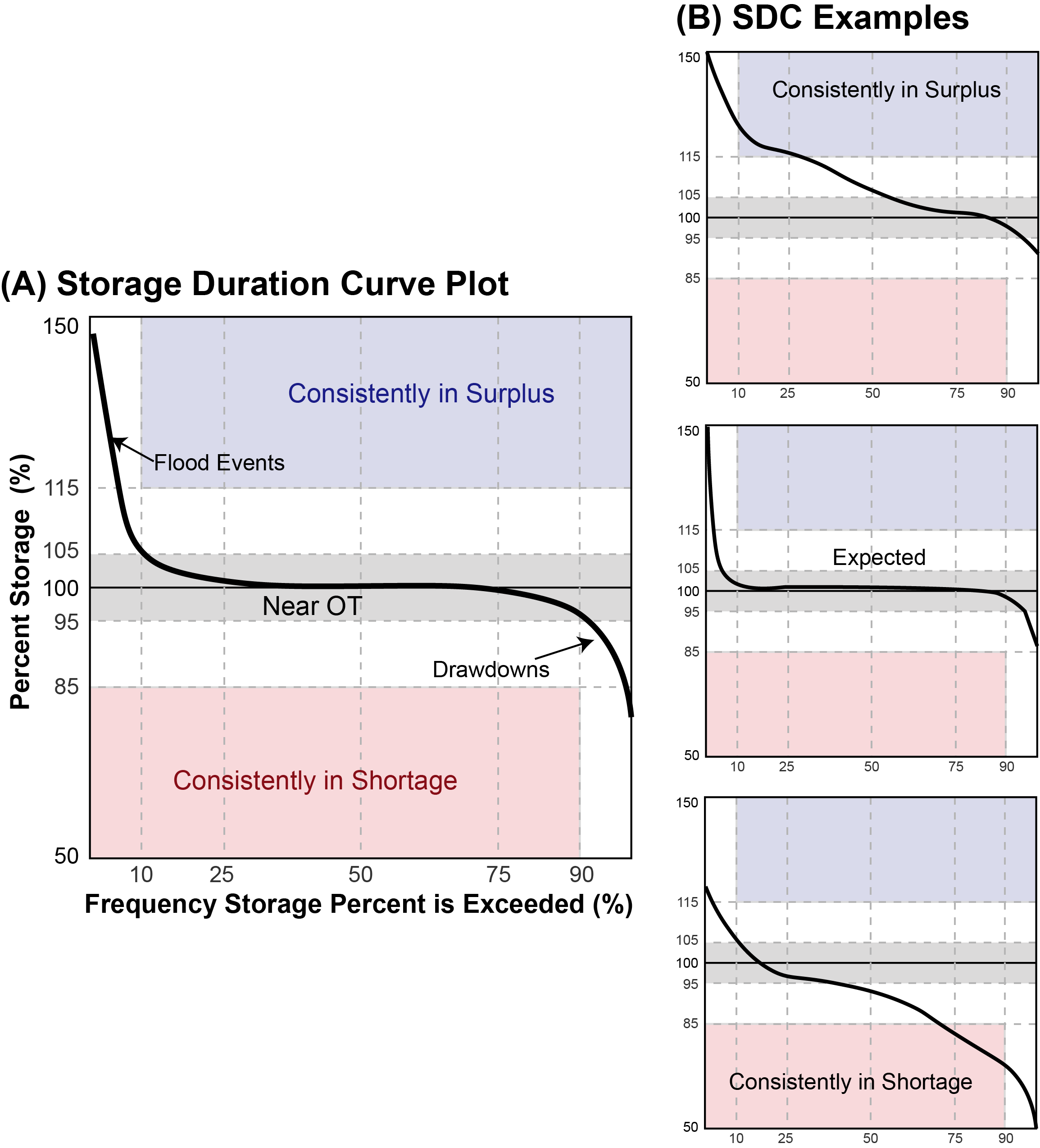 Operational departures over time displays the cumulative sum of departures from the operational target over time. The palmer drought severity index for the climate division of the reservoir is overlayed. Click here for more information:

A reservoir that is consistently in surplus mode will have the cumulative departure that increases over time with sharp increases occurring at major flood events. A reservoir that is consistently operating below the operational target will have a cumulative departure that decreases over time with rapid decreases occurring during major drought events. A reservoir that continually operates around the operational target will fluctuate around zero. Lastly, a reservoir may change and shift from one type of operational mode (surplus, shortage, balanced) to another type. 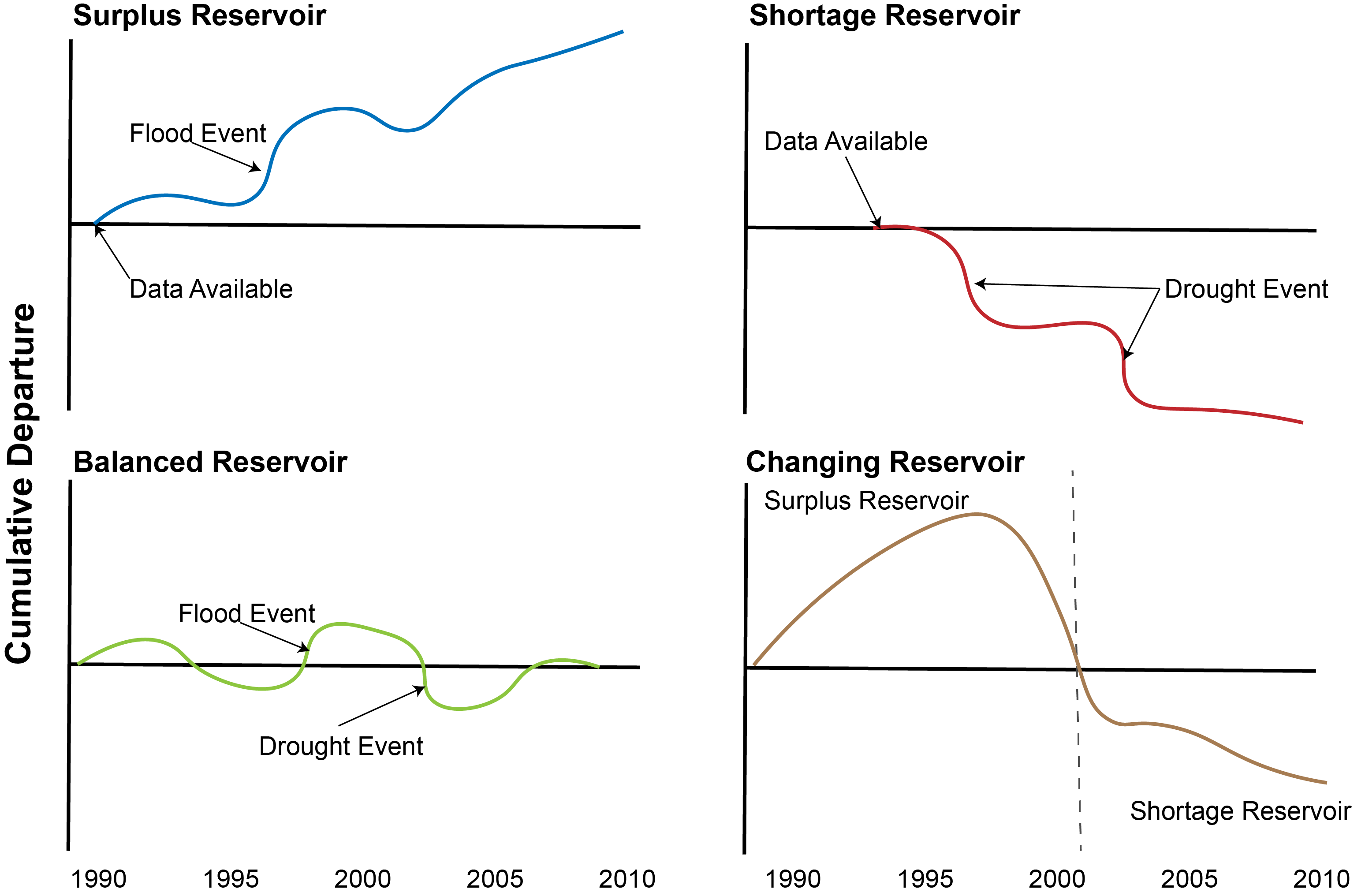 The magnitude of surpluses was calculated relative to the total volume up to the top of the flood control pool and deficits relative to the operational target volume. Surplus volumes go into the flood control pool and so we wanted to include the total volume when assessing the magnitude of surpluses. Whereas deficits should be in relation to the volume of the reservoir meant to be filled; i.e., the storage volume up to the top of the conservation pool as defined by the operational target (OT).

Each reservoir will have three scores since the frequency of departure is calculate relative to the magnitude (<5%, 5-15%, >15%).

The highest score (type) is taken as the overall type for the reservoir. The scores were arbitrarily chosen and can be modified to meet your organizations criteria of "significance".

The analysis methods are published in the Journal of American Water Resources Association: A Nationwide Analysis of U.S. Army Corps of Engineers Reservoir Performance in Meeting Operational Targets. The data in this visualization tool can be downloaded here:


A description of the data and data sources are available in the Nicholas Institute report: Creating Data as a Service for U.S. Army Corps of Engineers Reservoirs. Additional data associated with this report can be downloaded here: