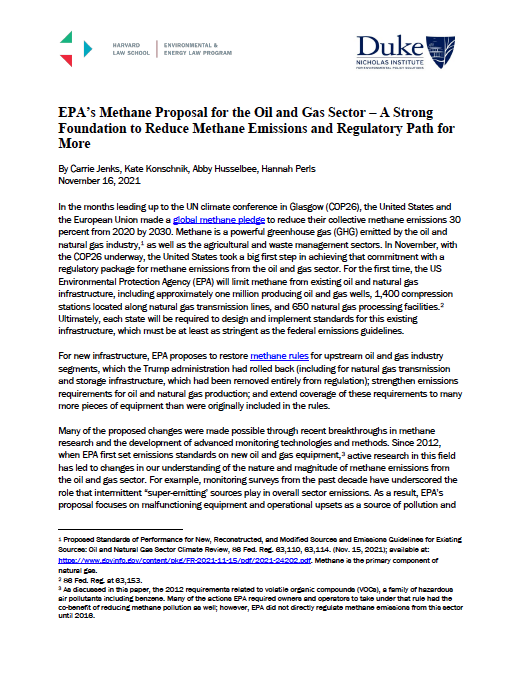 In the months leading up to the UN climate conference in Glasgow (COP26), the United States and the European Union made a global methane pledge to reduce their collective methane emissions 30 percent from 2020 by 2030. In November, with the COP26 underway, the U.S. took a big first step in achieving that commitment with a regulatory package for methane emissions from the oil and gas sector.

EPA’s proposal is broader than the 2016 rule’s requirements in terms of scope and stringency. It looks to reduce emissions from several potentially emitting components and activities not previously regulated in the oil and natural gas production sector and identifies numerical or work practice standards for each. And, for the first time, EPA will limit methane from existing oil and natural gas infrastructure, including approximately one million producing oil and gas wells, 1,400 compression stations located along natural gas transmission lines, and 650 natural gas processing facilities. Ultimately, each state will be required to design and implement standards for this existing infrastructure, which must be at least as stringent as the federal emissions guidelines.

Comments on the proposal are due to EPA by due January 14, 2022. There are many areas where public comment over the next 60 days could inform EPA’s final rulemaking. In this paper, we focus on those areas that could enable a regulatory framework to use advanced methane monitoring technologies and methods. We highlight key areas on which stakeholders may want to provide EPA comment to support a final rule that achieves significant emission reductions through the deployment of cost-effective technologies and approaches.