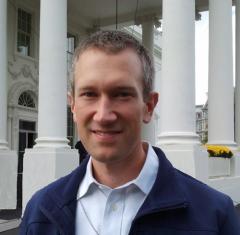 Before Drew McConville walked the hallways of America’s most iconic building, he was gaining real-world experience from experts at Duke University’s Nicholas Institute for Environmental Policy Solutions.

Now the senior advisor at the White House Council on Environmental Quality, he provides policy advice to senior White House leadership and ensures the President’s priority programs on everything from ocean protection to clean energy are advancing. But in 2007 McConville had his head down in Nicholas Institute research exploring potential elements of U.S. climate legislation.

“I worked with Tim Profeta and Jonas Monast for the two years I was at the Nicholas School of the Environment,” said McConville, who pursued his master’s degree in environmental management at Duke from 2007-09. “We were researching and writing about potential elements of climate legislation. That included options to harmonize a federal cap-and-trade program with state and regional greenhouse gas trading programs. It was a great opportunity to explore how the economic and policy ideas we were discussing in the classroom could work in the real world.”

The Nicholas Institute served as a springboard for McConville who began a summer internship with the State of Massachusetts Department of Energy Resources in 2008. There he worked on the Regional Greenhouse Gas Initiative in addition to other projects aimed at increasing the use and efficiency of renewable energy. After his time at Duke University, McConville went on to the U.S. Environmental Protection Agency’s (EPA) Office of Air and Radiation where he worked on a range of clean air issues, including regulation of greenhouse gases for the first time under the Clean Air Act.

“My internship and work with the Nicholas Institute gave me direct experience on different climate policies, as well as practice writing about and explaining issues for other policy makers,” McConville said.

After a year with the EPA, McConville was given an opportunity to work with the White House’s energy and climate team on a temporary basis. When leadership of the White House Council on Environmental Quality offered McConville a full-time position, he couldn’t pass it up.

“I was very fortunate to be at the right place at the right time,” McConville said. “I really believe in what the President is trying to accomplish, and I knew that I wouldn't have many opportunities like this again to make a difference at the national level.”

Despite political polarization and gridlock in Congress that can slow down his work, McConville—who learned to deeply respect the environment from his father and uncle—cherishes the opportunity to work alongside peers who share his goals and hopes other Duke students are able to become “environmental champions” across the government.

“There are always challenges with creating change within large institutions like the federal government,” McConville said of his role. “But the encouraging part is that there are a ton of ways to serve and a lot of really good people fighting to make a difference. For students looking to enter this field, I would recommend you keep your eyes open for new opportunities that come along and don't be afraid to pursue them when they do.”

This story was written by Victor Grubbs, a senior at North Carolina Central University who is working this summer as a communications intern with the Nicholas Institute for Environmental Policy Solutions.