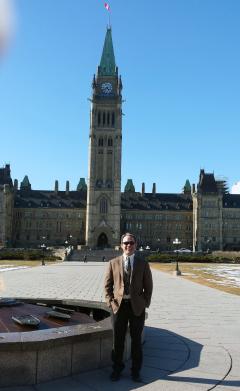 This past winter, Environmental Economics Program Director Brian Murray traded bike commutes in Durham for commutes by skates on Canada’s frozen Rideau Canal as a Fulbright Visiting Research Chair in Environment and Economy. There, Murray spent five months conducting research on carbon pricing systems at the University of Ottawa.

The visit happened to coincide with what would be a renewed focus on carbon pricing in Canada. One of his first tasks: conduct high-level meetings with provincial government officials looking to design or refine cap-and-trade systems—programs providing economic incentives for achievement of a specified level of reduction in targeted emissions.

“Brian was seen as one of the top experts in the world on the design of carbon pricing systems by these officials,” said Stewart Elgie, director of the University of Ottawa’s Institute of the Environment and chair of Sustainable Prosperity. “For governments that are interested in designing or refining their systems, being able to draw on Brian’s expertise was incredibly helpful. He is one of those academics who move easily between the policy and academic world, which allowed him to speak to some of the real-world questions. The timing couldn’t have been better.”

Murray is among the original designers of the allowance price reserve approach for containing prices in carbon markets—an approach adopted by California and the Regional Greenhouse Gas Initiative (RGGI) cap-and-trade programs. Throughout his career, he has produced more than 80 peer-reviewed publications on topics ranging from the design of market-based environmental policies and the effectiveness of renewable energy subsidies to the evaluation of programs to protect natural habitats such as forests and coastal and marine ecosystems.

While in Canada, he wrote several other papers, one of which reviewed and summarized all the research on the effectiveness of British Columbia’s carbon tax seven years after implementation. Murray, and his University of Ottawa colleague Nicholas Rivers, found that the “textbook” carbon tax—an instrument designed “straight out of the economist’s playbook”— delivered clear emissions reductions without harming the province’s economy.

The assessment, Elgie said, was the first to pull together all the evidence about the effectiveness of the tax and provided a real value for academics and policy makers as provinces consider their own options for curbing carbon emissions.

For Murray, the Fulbright experience was “eye opening” and a chance for a true exchange of knowledge for both parties.

“With this experience you don’t go to just study,” Murray said. “It is a true exchange. The University of Ottawa helped me find people from Canada to share experiences. In my case, that was government officials—a natural fit. These officials gained, what I hope, was some guidance on how to move forward designing or refining their carbon-pricing systems. I learned subtle but important differences and interesting parallels in how both countries practice environmental policy.”