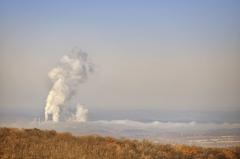 Pennsylvania Gov. Tom Wolf today initiated a process for his state to join the Regional Greenhouse Gas Initiative (RGGI), a cap-and-trade program to reduce emissions from the power sector in New England and Mid-Atlantic states. Pennsylvania ranks third nationally in electricity production and fourth in carbon dioxide emissions, according to the U.S. Energy Information Administration.

Quotes:
"This is a game changer, for a top energy producer like Pennsylvania to take this big step toward a cleaner future," says Kate Konschnik, director of the Climate and Energy Program at Duke University’s Nicholas Institute for Environmental Policy Solutions. "Governor Wolf is securing the Commonwealth's position as an energy leader in a carbon-constrained world."

Quotes:
"As one of the largest emitters of greenhouse gases in the country, Pennsylvania’s actions will have a real impact on the fight against climate change," says Tim Profeta, director of Duke University’s Nicholas Institute for Environmental Policy Solutions. “By seeking to link to the existing, efficient greenhouse gas program already working well in their neighboring states, they appear to be poised to do it in the most effective way available."

Bio:
Tim Profeta directs Duke University's Nicholas Institute of Environmental Policy Solutions and is an associate professor of the practice at the Sanford School of Public Policy. He has worked for nearly two decades on climate policy, with a particular focus on the use of market forces to reduce greenhouse gas emissions. His expertise also includes adaptive use of current laws to address evolving environmental challenges.

Note to broadcast editors: Duke provides an on-campus satellite uplink facility for live or pre-recorded television interviews, as well as a digital studio for interviews by Skype or YouTube Live. We are also equipped with ISDN connectivity for radio interviews. These services are usually available during normal business hours and, with enough advance notice, after-hours and on weekends. Broadcast reporters should contact Jeremy Ashton to arrange an interview.