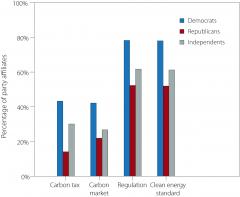 The percentage of Americans who think climate change is occurring has rebounded according to the Duke University national online survey, and is at its highest level since 2006. The study also finds that while Americans support regulating greenhouse gas emissions, they do not favor market-based approaches such as cap-and-trade or a carbon tax.

Only 29 percent strongly support or somewhat support a carbon tax. Returning revenue to taxpayers through a $500 tax rebate only slightly increases support for a carbon tax, to 34 percent. The survey indicates that many Americans haven't formed an opinion about the cap-and-trade approach: although support is low, 36 percent are neither for nor against.

“The survey shows strikingly high numbers of Americans accept that the climate is changing, but support for market-based approaches such as a carbon tax and a system of tradable emissions are not popular among survey respondents,” said Sarah Adair co-author and associate in research at Duke’s Nicholas Institute for Environmental Policy Solutions. “Support rises when asked about more familiar concepts of regulation, such as performance standards, but respondents appear to have little or no knowledge about the possible use of a cap-and-trade system to address climate change.”

The Duke University study examined public attitudes regarding climate change and the major policy options that President Obama might pursue in his second term. It was conducted by Frederick Mayer and Alex Pfaff of Duke's Sanford School of Public Policy and Adair of the Nicholas Institute.

”Whether in response to extreme weather events like mega-storm Sandy or the improved economy, public opinion has clearly rebounded from its low point of a couple years ago,” said Mayer, associate professor of public policy and political science. “Although there appears to be little prospect for tax or cap-and-trade legislation in the current Congress, there is a clear opening for stronger regulation and investments in clean energy.”

Other key findings of the poll:

The Internet survey was conducted Jan. 16-22, 2013 by Duke in partnership with KnowledgePanel and involved e-mails to randomly selected households throughout the United States. The margin of error for 1,089 respondents was 3 percentage points. Funding for the survey came from Duke's Climate Policy Working Group.

To review the study, visit http://nicholasinstitute.duke.edu/climate-change-poll

Note to broadcast editors: Duke provides an on-campus satellite uplink facility for live or pre-recorded television interviews. We are also equipped with ISDN connectivity for radio interviews. Broadcast reporters should contact Scott Wells at (919) 660-1741 or James Todd (919) 681-8061 to arrange an interview.