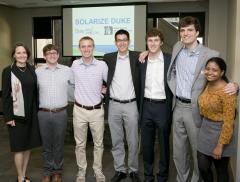 A team of Duke University students, staff, and faculty are helping to advance the university’s 2024 goal of carbon neutrality with a pilot program that connects Duke employees with vendors providing discounted rooftop solar installations.

The program takes advantage of 2016 federal and 2015 state solar tax credits, combining them with vendor-provided group discounts to deliver price cuts of as much as 65 percent in many cases.

“This Bass Connections Solarize Duke project is a great example of how the Nicholas Institute not only brings its expertise to students, but also furthers Duke’s sustainability endeavors,” said Tim Profeta, director of the Nicholas Institute. “From rigorous research of the state’s solar landscape, Duke students developed a pragmatic project that took advantage of tax credits, vetted solar installers, and gained university approvals to make deployment of a relatively climate-friendly energy technology a more affordable reality for university employees. Billy [Pizer] and I were excited to come along on their intellectual exploration.”

Although the program runs through December 2015, Adair said the university has plans to ensure some remnants of it are more permanent.

“There is potential for the state tax credit to be renewed,” Adair said. “If it is extended, we may be able to run a similar campaign next year. Even if the tax credit does go away, we will find something more permanent, whether it’s through the employee Perqs program or something similar.”

For student partners like Ellis Baehr and Daniel Ketyer, the opportunity to gain experience outside the classroom through Bass Connections left a lasting impression.

“I can say without a doubt that Bass Connections was the best experience I had at Duke,” said Baehr, who credits his involvement with helping him to secure his current job as an energy analyst at Jones Lang LaSalle. “Starting with a vague notion of what we wanted to accomplish and actually pushing it through is something to be proud of. I look forward to coming back in five or ten years and seeing the solar panels this project helped to install.”

The most significant aspect of Ketyer’s involvement was interacting with “the top faculty that study energy at Duke.” Ketyer, a public policy undergraduate added, “You can listen to a great professor in a lecture hall with 200 other students, but through this project I got the chance to be one of seven or eight people regularly sitting around a table with Tim Profeta and Billy Pizer, benefiting from the knowledge they had to share.”