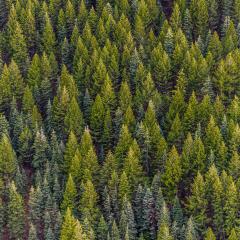 With the impacts of a warming planet becoming more apparent every day, climate change is taking center stage in the race for the Democratic Party's presidential nomination. Most of the candidates have articulated commitments or released plans to dramatically reduce greenhouse gas emissions through legislation, administrative actions, international diplomacy and other initiatives.

Yet, the candidates have spent almost no time on one of America's best weapons against climate change—forests.

America's nearly 1.3 million square miles of forests absorb about 15 percent of U.S. carbon dioxide emissions annually, storing carbon in growing trees, ecosystems, and wood products. By maintaining and expanding this forest carbon "sink," America can reduce greenhouse gas emissions more effectively and for less money, write Robert Bonnie, a Duke University Rubenstein fellow and former undersecretary of Natural Resources and Environment at USDA, and Jad Daley, president and CEO of American Forests, in The Hill. Yet, our forests' capacity to capture carbon from the atmosphere is diminishing as forests are lost to suburban development or are ravaged by wildfire and pest outbreaks, fueled in part by climate change.

History shows that we can respond. In the 1930s, in the wake of large-scale forest loss in the preceding decades, President Franklin Roosevelt's New Deal planted some 3 billion trees. Today's climate crisis calls for an even bigger investment in America’s forests, Bonnie and Daley argue in their op-ed.