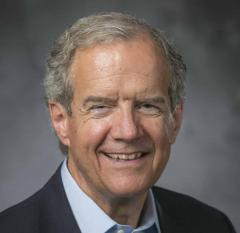 Steve Roady brings a wealth of environmental law and policy experience to his new joint appointment at Duke’s Law School and the Nicholas Institute for Environmental Policy Solutions.

As professor of the practice at the Law School and a faculty fellow at the Nicholas Institute, Roady, who has taught environmental litigation and ocean and coastal law and policy as a senior lecturing fellow at the Law School since 2003, will continue to teach. He will also be charged with creating interdisciplinary teams to examine approaches to large-scale environmental problems.

“Providing clean drinking water on a mass scale, limiting nitrogen emissions from agriculture, these types of large-scale environmental issues could be a focus,” Roady said of what he will do upon joining Duke July 1. “The idea is to identify these problems and then try to bring the brainpower available at the university to bear, tapping into different institutes, initiatives, and schools for relevant expertise.”

“Steve Roady is a tremendous addition to our faculty and our environmental law program,” said Professor Guy-Uriel Charles, Duke Law’s Senior Associate Dean for Faculty & Research. “He will help provide our students unprecedented access to the leading environmental lawyers and advocacy groups in this country.”

Roady leaves a post as an environmental lawyer at Earthjustice (formerly the Sierra Club Legal Defense Fund) where he focused initially on ocean-related litigation and policy. In this role, he pioneered innovative litigation strategies to preserve ocean resources. He also litigated precedent-setting cases that protect water resources and improve the nation’s air quality. More recently, he has been pursuing cases designed to protect coral reefs, and to prevent the mountains and streams of southern West Virginia from being destroyed by mountaintop removal coal mining.

“Very few have the breadth and depth of environmental law and policy experience that Steve Roady possesses,” Nicholas Institute Director Tim Profeta said.  “He has not only seen, but been involved in the creation of many important environmental policies throughout history, and will bring an unparalleled knowledge of the debates and the stakeholders to Duke. I look forward to his leadership on efforts at the Nicholas Institute to tackle new and challenging environmental problems.”

From 1998 to 2000, Roady was the director of the Ocean Law Project, an initiative that employed litigation and negotiation to ensure that the U.S. government conserved ocean resources, including fisheries, marine mammals, sea turtles, and ocean ecosystems. During 2001 and 2002, he was the first president of Oceana, a non-profit international ocean conservation organization dedicated to protecting life in the sea through public education, advocacy, communications, science, and litigation.

In 1989 and 1990, Roady served as counsel to United States Senator John H. Chafee on a number of environmental matters in the Senate Committee on Environment and Public Works, including air quality improvement, coastal barrier island protection, water pollution control, and hazardous waste regulation.  While on the Senate staff, Roady was closely involved in drafting the Clean Air Act amendments of 1990. Before his Senate staff stint, he assisted various companies with their efforts to comply with a wide range of environmental statutes.

The scope of the federal environmental statutory and regulatory landscape, and the ensuing possibilities for managing and protecting the environment through legal and policy measures, have expanded greatly over the course of his career.

“When I was at Duke as a student, everything was just starting,” he said. “An avalanche of federal environmental laws were enacted in this country beginning in the 1970’s, things like the National Environmental Policy Act, then the Clean Air Act, the Clean Water Act, and the Endangered Species Act. All these laws fundamentally changed the way this country deals with environmental problems.”

Even though students studying environmental law and policy now have an established regulatory framework to work with, they also face more complex issues.

“Now, things are more complicated,” he said. “We’ve spent thirty years or so addressing the easily identifiable problems—we have a lot less raw sewage in the rivers. Now we’re looking at things in a more nuanced way, and overarching all of this is climate change, which wasn’t really on the radar until very recently. It’s sobering stuff.”

Steve Roady is available for comment by contacting Erin McKenzie, erin.mckenzie@duke.edu or 919.613.3652.