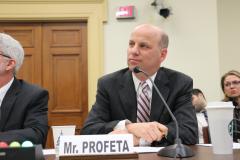 The United States emits nearly one-sixth of the world’s greenhouse gasses each year and ranks first among all countries in historic emissions. This gives the U.S. a proportionately high responsibility to curb greenhouse gas emissions. Yet, partisan political gridlock has left it in a state of paralysis, unable to take action in the face of the climate crisis.

“We need to act on climate urgently,” said Tim Profeta, director of the Nicholas Institute for Environmental Policy Solutions. “There have been a number of proposals that have been through Congress, but they’ve all been unsuccessful because of political differences.”

Profeta has proposed a new strategy for cutting U.S. climate emissions by playing to the strengths of the government’s federalist structure through a partnership between state and federal governments.

The federal and state governments have worked together throughout the nation’s history to mandate and carry out environmental regulations. For instance, states have been responsible for meeting federal pollution targets surrounding air quality for decades.

Climate change has been called the test of our generation, an existential threat to humankind, and one of the greatest collective action challenges in history. It is not an issue that can afford to be caught up in political gridlock.
– Tim Profeta, Nicholas Institute for Environmental Policy Solutions

Similarly, a federal-state partnership on climate change would allow states to meet federal emissions targets with whatever approach or combination of approaches that best fits that state’s needs and socioeconomic context.

“Simply let Congress determine the level of ambition needed to achieve our climate goals,” wrote Profeta in an October 2019 policy brief. “And then use the state governments, which are more in touch with the equitable tradeoffs of their populations and directly accountable to their communities, to execute plans to reach those goals.”

In addition to allowing state governments to customize plans to meet their emission reduction goals, a federal-state partnership would avoid penalizing states that have been actively working to curb greenhouse gas emissions for decades.

“The plan has the advantage of using a structure that people are comfortable with,” said Profeta. “It allows the states that already have emissions plans to keep doing what they’re doing and be credited for their work rather than having a federal program resist it. And states can work cooperatively through this program and create efficiencies if they want to.”

Given the divisive political climate in the United States, a top-down approach to addressing climate change by cutting emissions is unlikely to work. Perhaps more importantly, the proposal is not about specific climate mitigation policies, but rather about structures that could make new policies feasible.

“The Nicholas Institute really tries to protect its role as a non-advocate,” Profeta said. “We’re really trying to present this proposal in an ‘if-then’ way—if we take this approach, then we may get these results.”

In December 2019, Profeta testified to Congress outlining a proposed path for combating climate change. Now, parts of the plan have been written into a draft bill in the U.S. House Committee on Energy and Commerce.

In recent months, Profeta led development of two additional policy briefs to build a foundation for a potential federal-state partnership. One brief focuses on improvements that states need to make in understanding climate impact costs and developing resiliency strategies, while the other explores grant programs as a potential mechanism that the federal government could employ to support state climate efforts.

“Climate change has been called the test of our generation, an existential threat to humankind, and one of the greatest collective action challenges in history,” said Profeta. “It is not an issue that can afford to be caught up in political gridlock.”