Statement on the Passing of Jim Rogers 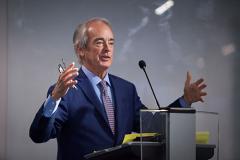 The Nicholas Institute for Environmental Policy Solutions, and the larger Duke University community, are heartbroken at the loss of our good friend, Jim Rogers. His passing yesterday leaves a void in the Institute’s leadership, on our campus, and across the world of energy and the environment. It is not a void that can ever truly be filled.

I came to know Jim when I was a Hill staffer, running the Senate Subcommittee on Clean Air, Wetlands and Climate Change. Jim arrived at my office as the CEO of Cinergy, the utility that burned more coal by percentage than any other. I expected a confrontational meeting. Instead, I was surprised by a deep and thoughtful exchange about the need for a reasonable planning horizon for Cinergy to be able to convert its fleet away from greenhouse gas emitting technologies.

But even more interesting to me was the man with whom I had this exchange—a humble but charismatic leader who broke down barriers of culture and personality with nearly everyone he met, connected as a human, and found common ground. Jim was more than the prudent executive with whom you could engage about the future of energy in America—he was the CEO with whom you wanted to get a beer (or a vodka with a twist of lemon, as Jim preferred).

When I came to Duke to start the Nicholas Institute, I was asked to build a board of advisors. It was beyond certain that I would ask Jim to help. He was savvy, experienced, and strategic, and he possessed a deep knowledge of the political world in which the Institute needed to work. And he was generous with his time and knowledge—precisely the type of mentor one would desire if asked to build an Institute from scratch.

And for 13 years now, Jim has helped the University find the partnerships and the topics through which we might make meaningful progress toward solving environmental challenges. And all the while, he has encouraged us with a smile, a laugh, and a subtle needle.

After Jim stepped down as CEO of Duke Energy, our partnership deepened. Jim called, asking to think together on what would be next for him, and that conversation led to his taking the first Rubenstein Fellowship at Duke University. And did he ever dedicate himself to that Fellowship! He wanted to set the bar for the nascent program, and be the best fellow the University would ever have. He held lightning-round office hours, holding back-to-back meetings with students all day.

The most illuminating experience from that fellowship was the course that Jim and I taught on rural electrification in Africa and India. We created it as a venue for him to explore the ideas he was outlining for a forthcoming book on the challenge of bringing electricity to the billion-plus people who lack it. The course attracted graduate students from five schools across Duke, and they did not disappoint, wielding tools from a range of disciplines as they tore at his hypotheses from every angle. Jim had been developing his arguments for years, yet he demonstrated no defensiveness or hubris. Rather he reveled in the intellectual pushback. Meanwhile, he offered every student in the course a lunch or dinner to explore whatever he or she wanted—and every student took him up on it.

Jim expressed deep gratitude to the students for the experience. When Lighting the World: Transforming Our Energy Future by Bringing Electricity to Everyone (St. Martin’s Press, 2015) was published, he was quick to acknowledge that Duke students’ critical thinking had helped shape the book’s growth.

Jim enjoyed teaching. He delighted in building things. He took great satisfaction in working to solve problems, especially daunting ones like worldwide electrification. But above all else, Jim loved his family. Today, our hearts go out to M.A., his children and his grandchildren. Jim often said that he lived by “the grandfather’s rule”—he wanted to work in a way that would make his grandchildren proud. He has certainly succeeded.

Jim was a great mind, a great leader, and a great operator in the best sense of the word. And to so many, he was also a great friend. His disarming manner, boundless energy, amiable Kentucky accent, graciousness, and quick wit made every exchange with Jim a delight. What I would do to have a chance to enjoy even one more conversation with him! Rest in peace, Jim, and thank you.