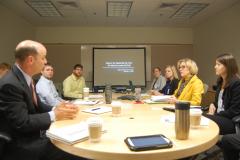 Even before the U.S. Environmental Protection Agency announced its plan, in June 2014, to regulate emissions from existing power plants, the door appeared to open for a similar effort in other sectors, including petroleum refining. Three Duke University students led by staff from Duke’s Nicholas Institute for Environmental Policy Solutions and Clean Energy Durham set out to investigate whether policies for regulating carbon emissions from electric-generating units (EGUs) might be translatable to a greenhouse gas (GHG) performance standard for refineries.

“The project actually began as an exploration of U.S. climate policy options given lack of appetite for climate change legislation,” said Allison Donnelly, then a senior undergraduate student and now a project consultant with Energy & Resource Solutions. “That means that emissions reductions have to come through existing regulations. EPA had started working on regulations for the power sector—the largest GHG emitter in the U.S.—so we wanted to look at the next largest emitters, petroleum refining and steel manufacturing, and how EPA could regulate them in a non-cost-prohibitive way. We ended up focusing on the petroleum refineries.”

The team’s research, including emissions data analysis by Yanyou Chen, a graduate economics student, revealed substantial differences between the power and petroleum refining industries. Moreover, according to Kristie Beaudoin, then an environmental law student, differences among individual refineries were significant. “No two refineries have the same configuration or emissions profile,” Beaudoin, now an attorney at the law firm Gibson, Dunn & Crutcher, said. “It seemed clear to us that policies for regulating carbon emissions from electric-generating units might be translatable to a GHG performance standard for refineries, but rulemaking for refineries would be far more complex than for EGUs.”

The Bass Connections team explained the rulemaking implications of the differences between the two industries in a policy brief. In a companion working paper, they analyzed some of the key questions the EPA would face in designing a performance standard for petroleum refineries—work informed by conversations with the agency, oil companies, and trade groups.

In a presentation of their findings at the EPA’s Research Triangle Park office, Donnelly, Beaudoin, and their Nicholas Institute team members—policy associate Sarah Adair, Environmental Economics Program director Brian Murray, faculty fellow Billy Pizer, and Nicholas Institute director Tim Profeta—confirmed to EPA officials that a simple transfer of EGU compliance principles to the refining sector was impossible. They also detailed conclusions about potential regulatory formats on the basis of their research and stakeholder input.

“Interdisciplinary research was critical to our work,” Donnelly recalled. “When we discussed what actually goes into creating EPA regulations, we realized that the issue is far more complex than any one of our individual fields of study. It was only through pooling our expertise that we could gain enough understanding to be able to talk to industry experts and ultimately start a dialogue on the future of greenhouse gas regulations for the petroleum refining industry.”

Working with Donnelly, Beaudoin, and Chen was a rewarding experience for Pizer. “It set the bar extremely high for future student collaborations,” he said. “I’ve had numerous people contact me and say that their work was extremely helpful—and really the only work out there—on this topic.”