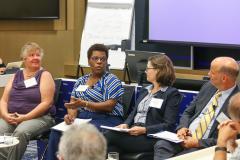 The more Hurricane Florence fades from memory, the more Donna Chavis struggles to talk about it.

In her rural Lumberton, NC, the storm that ravaged eastern North Carolina a year ago isn’t over yet. Its devastation is evident today in the many people who are still sick or jobless or homeless – or living in their cars because their houses are plagued by mold.

Swaths of eastern North Carolina had yet to recover from Hurricane Matthew, a category 5 storm in 2016, when Florence arrived two years later.

“We can’t separate Matthew and Florence because it’s cumulative impact,” Chavis, a community activist for environmental and social justice issues in and around Robeson County, said this week at a Duke University conference on climate change and hurricane resilience. “The cumulative effects of poverty go back generations. That’s what we really need to influence. Not just the direct impact of the storms but the impact over the years.”

Chavis and other panelists put a human face to the struggles eastern North Carolinians endure during and long after deadly hurricanes pass through. She was part of one of seven panel discussions that also featured Duke scholars in law, public policy, environmental science and other relevant fields.

Her insights regarding the cumulative and long-term impact of hurricanes on low-income communities was echoed by others. Andy Read, who directs Duke’s Marine Lab in Beaufort and lives in that area, said that while local residents there are resilient, many lack the resources to prepare properly or evacuate.

“They lived through the storm and they’re still living through the storm now,” he recounted. “The impacts don’t fall evenly. People who live in underserved communities have been living for years with this trauma. It’s a story that doesn’t get enough light. The storm hasn’t finished for these people.”

While the higher-income residents of coastal areas may generally fare better during these storms, wealth isn’t the only factor, Duke’s Elizabeth Albright.

A professor with Duke’s Nicholas School of the Environment, Albright has studied the ways towns prepare for devastating storms and deal with the aftermath. Towns that involve local non-profits, faith-based organizations and other community groups in both storm planning and recovery strategizing often rebound effectively, because the community’s role in these weather events is vital, Albright said.

“It’s a fiscal resource, access-to-resources story, but it’s much more nuanced than that,” she said. “Local communities who have engaged and empowered community members in the recovery process do reasonably well, even if they weren’t high wealth communities.”

Other topics covered by Duke scholars included public health issues that arise after hurricanes; ways to help coastal economies during storm times; the use of social media to disseminate emergency information quickly when the power goes out; and how drones are a helpful tool to quickly and cheaply assess storm damage.

Here are three other takeaways from this week’s conference on North Carolina and hurricanes:

Hardened shorelines, the seawalls, bulkheads and other barriers made from hard, artificial materials, are a popular way for coastal residents to protect their property from storms. But they come at a significant price because they cut off the natural connection between land and sea and can destroy natural habitats, said Carter Smith, a postdoctoral associate with the Nicholas School of the Environment.

They can also give property owners a false sense of security and encourage them to build in risky areas, Smith said. A better alternative, she argued, is a “living shoreline,” a more permeable barrier that incorporates vegetation and other softer elements that allow organizations to move freely between land and sea while still providing a buffer.

Fishermen Are Taking a Big Hit

Hurricane Florence and storms like it are particularly devastating to the fishing industry in eastern North Carolina, said Barbara Garrity-Blake, a cultural anthropologist and author who has studied and written extensively about the state’s fishing industry. Many seafood supply chains shut down for 4 to 6 weeks last year after Hurricane Florence because of damage to docks and roads.

While some long-term effects of that storm aren’t known yet, history shows that hurricanes can cause a crab die-off because of low oxygen levels in the water.

Some good news, though: while fishing communities may struggle financially, they are very tight-knit, overflowing with what scientists call ‘social capital,’ Garrity-Blake said. “They help each other. When seafood wholesalers see a storm coming, they stockpile ice. They know they’ll lose power. So the ice is for the community. They leave doors unlocked and tell community members to come get the ice they need. The fishing industry is resilient.”

Government and other officials traditionally use historical data when planning for future storms, said Toddi Steelman, the Stanback Dean of the Nicholas School of the Environment.  That needs to change because the conditions have changed.

“We know the storms we’re experiencing today are different; warming oceans mean more moisture in the air, which means more rain,” Steelman said. “These storms in some cases are moving more slowly, which increases the chance of flooding. We need to account for these changing dynamics. The changes taking place around us are coming at us faster than we can adapt to them. We desperately need to get smarter, faster.”

The full conference can be viewed here.