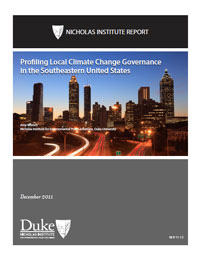 While other regions have taken a more proactive approach, state and federal government officials and privately owned utilities have largely dismissed the idea of climate and energy policies in the southeastern United States. In this environment, many cities have developed climate and sustainability programs independent of state action. In the summer of 2011, the Nicholas Institute for Environmental Policy Solutions surveyed Southeastern cities with populations greater than 100,000 on their sustainability, climate, and energy policies and practices. This report presents the results of that survey, which reflect how local governments in the region are articulating goals, exercising influence and authority, and planning and implementing policy. The research revisits many of the topics analyzed in a similar 2010 Nicholas Institute report, and it provides a glimpse at the direction of local governments in the Southeast.