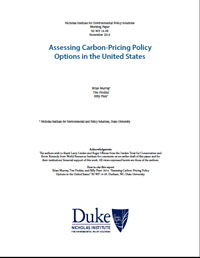 Much of the focus of efforts to reduce greenhouse gas emissions has been on the pursuit of policy mechanisms that will put a price on carbon. In the United States, such mechanisms have been established in several states and were the central feature of federal legislative proposals of the last decade. With the political failure of those proposals in 2009-2010, creation of a de novo carbon-pricing regime was given little attention—until recently. Calls for fiscal reform and an evolving regulatory setting (especially use of the Clean Air Act to regulate greenhouse gases) might create political appetite for a new effort to pursue a carbon-pricing policy. To inform discussion, this paper identifies and assesses options for establishing a price on carbon in the United States.