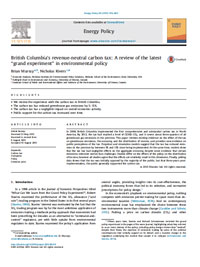 In 2008, British Columbia implemented the first comprehensive and substantial carbon tax in North America. By 2012, the tax had reached a level of C$30/t CO2, and it covered about three-quarters of all greenhouse gas emissions in the province. This article reviews existing evidence on the effect of the tax on greenhouse emissions, the economy, and the distribution of income, and it provides new evidence on public perceptions of the tax. Empirical and simulation models suggest that the tax has reduced emissions in the province by between 5 percent and 15 percent since being implemented. At the same time, models show that the tax has had negligible effects on the aggregate economy, despite some evidence that certain emissions-intensive sectors face challenges. Studies differ on the effects of the policy on the distribution of income; however, all studies agree that the effects are relatively small in this dimension. Finally, polling data show that the tax was initially opposed by the majority of the public but that three years post-implementation, the public generally supported the carbon tax.