PURPA’s Midlife Crisis: Will Its 40th Birthday Be One of Fundamental Change? 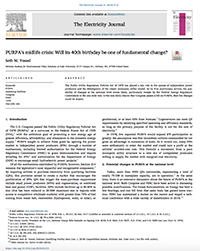 The Public Utility Regulatory Policies Act of 1978 (PURPA) has played a key role in the spread of independent power producers and the dislodgment of the classic monopoly utility model. Changes in the law at the national level seem likely, particularly tweaks by the Federal Energy Regulatory Commission to the one-mile rule, which dictates when two facilities are truly separate and distinct, so as not to be described as a singular qualifying facility occupying the same location. Although much less likely, passage of a PURPA bill by Congress could entail drastic changes. This article in The Electricity Journal lays out the issues that could lead to PURPA changes.