Understanding the Interaction between Regional Electricity Markets and State Policies 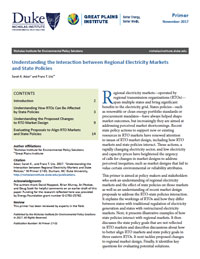 Regional electricity markets—operated by regional transmission organizations (RTOs)—span multiple states and bring significant benefits to the electricity grid. States policies—such as renewable or clean energy portfolio standards or procurement mandates—have always helped shape market outcomes, but increasingly they are aimed at addressing perceived market shortcomings. Recent state policy actions to support new or existing resources in RTO markets have renewed attention to issues of RTO market design, including how RTO markets and state policies interact. Those actions, a rapidly changing electricity sector, and low electricity and capacity prices have heightened the urgency of calls for changes in market designs to address perceived inequities, such as market designs that fail to value certain environmental or reliability attributes. This primer is aimed at policy makers and stakeholders who seek an understanding of regional electricity markets and the effect of state policies on those markets as well as an understanding of recent market design proposals that are designed to address the RTO-state policies interaction. It explains the workings of RTOs and how they differ between states with traditional regulation of electricity generation and states with restructured electricity markets. Next, it presents illustrative examples of how state policies interact with regional markets. It then discusses the state policy goals that are not reflected in RTO markets—such as state environmental policies—and describes discussions about how to better align RTO markets and state policy goals in three eastern RTOs. It next tackles proposed changes to regional market design—such as two-tiered capacity markets and carbon pricing—as well as other options that could be considered. Finally, it concludes by identifying key questions for evaluating potential solutions.