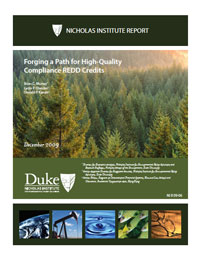 Concerns over the potential for catastrophic climate change drive the call for significant reductions, 50 to 80 percent by mid-century, in the concentration of greenhouse gases in the atmosphere. With 15-20 percent of current greenhouse gases resulting form forest clearing, it would be nearly impossible to meet these long-term goals without addressing the forest problem. As a result, most policy initiatives to address forests' role in climate change mitigation involved developed countries financing much or most of the reductions, at least initially.