Working Together: A call for Inclusive Conservation 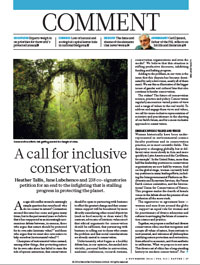 An age-old conflict around a seemingly simple question has resurfaced: why do we conserve nature? Contention around this issue has come and gone many times, but in the past several years we believe that it has reappeared as an increasingly acrimonious debate between, in essence, those who argue that nature should be protected for its own sake and those who argue that we must also save nature to help ourselves. Heather Tallis, Jane Lubchenco and 238 co-signatories (including the Nicholas Institute's Lydia Olander) petition for an end to the infighting that is stalling progress in protecting the planet.