Forests and Climate Change Mitigation: The Role of Markets 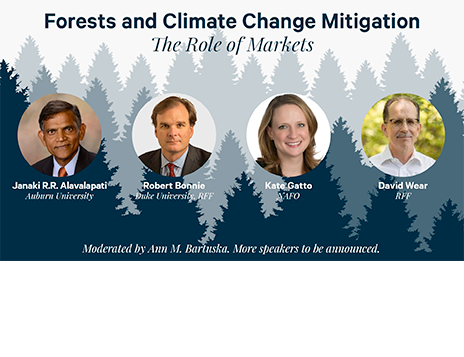 Earth’s carbon is stored in reservoirs, such as the atmosphere, the ocean, sediments, and trees. In the United States, forests store the equivalent of 52 years’ worth of US carbon emissions. This reservoir is expanding by about 0.5 percent per year; however, net growth is expected to decline over the next 30 years, primarily due to land use changes and forests aging. In order to mitigate this decline and expand carbon storage in forests, the Obama-era Mid-century Strategy for Deep Decarbonization proposed a set of policy options, including afforestation (creating new forests), avoided deforestation, and forest management strategies. Forests are also at the root of House Republican leaders’ push to capture carbon dioxide from the atmosphere. Last week, they unveiled plans for a series of climate bills, among which is a proposal to grow more trees “for the purpose of sequestering carbon.”

Join Resources for the Future (RFF) on Tuesday, February 11, for an in-depth conversation on the important role forests can play in climate change mitigation. A healthy forest products sector is critical to achieving this goal, because it can encourage the retention and management of forests. This RFF Live event will begin with a short background presentation on forest management and the wide range of forest products, followed by a moderated panel discussion with representatives from the forest industry, the energy sector, and experts in forest science and policy.