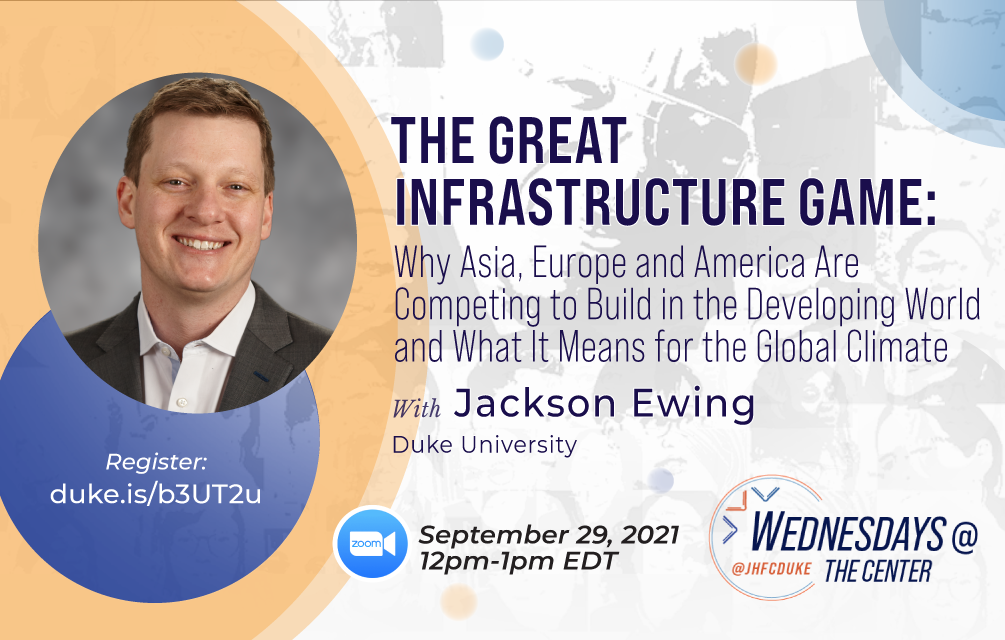 Jackson Ewing, Senior Fellow, will present "The Great Infrastructure Game: Why Asia, Europe and America are Competing to Build in the Developing World and What It Means for the Global Climate."

There is growing international competition to build infrastructure in developing countries. At the center of this competition is how different investment sources, standards and approaches will affect the global climate. Under the umbrella of its Belt and Road Initiative (BRI), China has become a global leader in debt and equity investments, underwriting, and infrastructure project operations across Asia, Africa and Latin America. BRI outbound investments have traditionally been comparatively emissions intensive, but this calculation is changing partly in response to growing international pressure for China to rollback such investments - particularly on coal - in the name of reaching global climate change targets. Japan and the Republic of Korea - the other major Asian players in outbound infrastructure investment - face similar pressures and are likewise exploring flights from high emissions investments. Meanwhile, the United States Development Finance Corporation, the European Bank of Reconstruction and Development, and international institutions from the World Bank to the Asian Development Bank - in part in response to the BRI - are accelerating efforts to offer low-emissions investment packages that have the corollary of steeper conditionality. This competition to build developing country infrastructure is paramount to broader international goals for addressing climate change, and its future is uncertain. This talk will explore the diplomatic and geopolitical drivers of infrastructure investment, the key characteristics of investments by major players, and the climate stakes of infrastructure development outcomes.

Jackson Ewing holds a joint appointment as a senior fellow at Duke University's Nicholas Institute of Environmental Policy Solutions and an adjunct associate professor at the Sanford School of Public Policy. He works closely with the Duke Kunshan University Environmental Research Center and International Masters of Environmental Policy programs to build policy research collaboration across Duke platforms in the United States and China.

This event is sponsored by the John Hope Franklin Center and the Duke University Center for International and Global Studies.