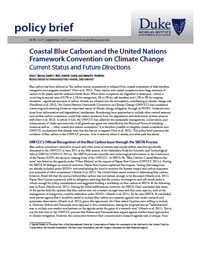 Blue carbon has been defined as “the carbon stored, sequestered or released from coastal ecosystems of tidal marshes, mangroves and seagrass meadows.” These marine and coastal ecosystems store large amounts of carbon in the plants and the sediment below them. When these ecosystems are degraded or destroyed, significant amounts of carbon dioxide are released into the atmosphere, contributing to climate change risk. The United Nations Framework Convention on Climate Change (UNFCCC) has considered conserving and restoring forests an important aspect of climate change mitigation through its REDD+ (reduced emissions from deforestation and degradation) mechanism. Broadening these approaches to include other natural systems, such as blue carbon ecosystems, could help reduce emissions from the degradation and destruction of these areas as well. This policy brief examines the evolution of blue carbon in the UNFCCC process—how it entered, where it stands, and what path lies ahead.