The Creeping Disaster That Led to Water Law

This is the eleventh installment in a 12-part series highlighting the environmental policy impacts of the Nicholas Institute for Energy, Environment & Sustainability over its first decade.

In 2007, North Carolina was facing a relentless drought resulting in mandatory statewide water restrictions. By the end of that year, all 100 counties were affected.

The crisis renewed attention to the importance of an assured water supply in the state. At the request of the North Carolina General Assembly, Duke University’s Nicholas Institute for Energy, Environment & Sustainability co-led a study with the University of North Carolina examining ways to more effectively deal with water conflict, future scarcity and drought. The 59-page document detailed nine measures for the General Assembly to consider during the 2009 legislative session to ensure a secure water supply. Two of those recommendations would become law.

“A key factor in long-range planning for water availability is the amount of water needed in a river or stream to maintain ecological integrity—the ecological flow,” said Bill Holman, North Carolina Director of the Conservation Fund and co-author of the original report to the General Assembly. “At the time, the hydrological models that were completed not only allowed for closer examination of this flow with data based in science, but also led to more robust discussions and collaborations on water planning in the Triangle that would not have otherwise happened.”

The models allowed the state to simulate the flow of water in a river basin to predict which surface water systems may experience shortages during droughts and normal flow times.

To establish the ecological parameters for the models, the Ecological Flows Science Advisory Board was created. Nicholas Institute State Policy Program Director Amy Pickle, who was on the board, recalls the charge: “We were tasked with characterizing flow requirements and assessing the science around river and stream flows. Ultimately, by understanding how changes in flows affect the ecology, we could set reasonable expectations on how much water is available for water supply.”

Three years later, the board had a recommended strategy: maintain between 80–90 percent of stream flow across the 17 river basins. Taking out more should signal the Department of Environment and Natural Resources to take a closer look at potential impacts.

“Absent our involvement, ecological flows would not have been part of the conversations around river basin planning,” Pickle said. “Our work helped to create a framework for evaluating water allocation policy that had been absent in North Carolina.” 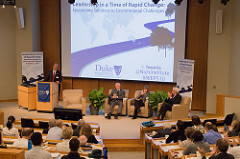