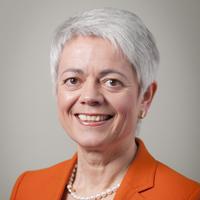 Secretary of State, Federal Ministry for Education and Research, Federal Republic of Germany

Cornelia Quennet-Thielen is Secretary State at the German Federal Ministry of Education and Research, responsible for more than 1,000 members of staff and an annual budget exceeding €10 billion. Before becoming State Secretary, she served as Deputy Chief of Staff at the Office of the Federal President of Germany (2004–2008). During this period, Quennet-Thielen acted as the president’s senior advisor on domestic policy as well as on constitutional law and mercy petitions.

Prior to joining the president’s staff, Quennet-Thielen was deeply invested in environmental and sustainability policy at the Federal Ministry for the Environment, Nature Conservation, and Nuclear Safety. From 1999 to 2004, she served as Deputy Director-General, with primary responsibility for strategic planning for environmental legislation and research, which encompassed the development of a national strategy for sustainable development. In her capacity as head of the German negotiating team for climate change from 1990 to 1999, she helped shape the UN Framework Convention on Climate Change and the Kyoto Protocol. She was also the responsible German negotiator at the Rio Earth Summit in 1992 and helped oversee its follow-up.

Quennet-Thielen entered public administration as personal assistant to State and then Federal Environment Minister Klaus Toepfer from 1985 to 1990. She has a strong background in law, having received her final degree in 1984 and started her professional career as a judge. She became a World Fellow of Yale University in 2003.