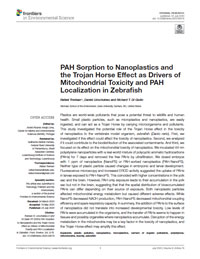 Plastics are world-wide pollutants that pose a potential threat to wildlife and human health. Small plastic particles, such as microplastics and nanoplastics, are easily ingested, and can act as a Trojan Horse by carrying microorganisms and pollutants. This study investigated the potential role of the Trojan Horse effect in the toxicity of nanoplastics to the vertebrate model organism, zebrafish (Danio rerio). First, we investigated if this effect could affect the toxicity of nanoplastics. Second, we analyzed if it could contribute to the biodistribution of the associated contaminants. And third, we focused on its effect on the mitochondrial toxicity of nanoplastics. We incubated 44 nm polystyrene nanoparticles with a real-world mixture of polycyclic aromatic hydrocarbons (PAHs) for 7 days and removed the free PAHs by ultrafiltration. We dosed embryos with 1 ppm of nanoplastics (NanoPS) or PAH-sorbed nanoplastics (PAH-NanoPS). Neither type of plastic particle caused changes in embryonic and larval development. Fluorescence microscopy and increased EROD activity suggested the uptake of PAHs in larvae exposed to PAH-NanoPS. This coincided with higher concentrations in the yolk sac and the brain. However, PAH-only exposure leads to their accumulation in the yolk sac but not in the brain, suggesting that that the spatial distribution of bioaccumulated PAHs can differ depending on their source of exposure. Both nanoplastic particles affected mitochondrial energy metabolism but caused different adverse effects. While NanoPS decreased NADH production, PAH-NanoPS decreased mitochondrial coupling efficiency and spare respiratory capacity. In summary, the addition of PAHs to the surface of nanoplastics did not translate into increased developmental toxicity. Low levels of PAHs were accumulated in the organisms, and the transfer of PAHs seems to happen in tissues and possibly organelles where nanoplastics accumulate. Disruption of the energy metabolism in the mitochondria may be a key factor in the toxicity of nanoplastics, and the Trojan Horse effect may amplify this effect.