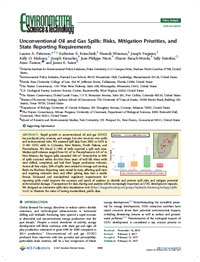 An analysis led by the Nicholas Institute for Environmental Policy Solutions, which appears in the journal Environmental Science & Technology, concludes that making state spill data more uniform and accessible could provide stakeholders with important information on where to target efforts for locating and preventing future spills. However, reporting requirements differ across states, requiring considerable effort to make the data usable for analysis.

By examining state-level spill data, it finds that 2 to 16 percent of hydraulically fractured oil and gas wells across Colorado, New Mexico, North Dakota and Pennsylvania spill hydrocarbons, chemical-laden water, hydraulic fracturing fluids and other substances each year. The study characterizes spills associated with unconventional oil and gas development at 31,481 wells hydraulically fractured or "fracked" in the four states between 2005 and 2014, identifying 6,648 spills in the 10-year period. Across all states, the first three years of a well's life, when drilling and hydraulic fracturing occurred and production volumes were highest, had the greatest risk of a spill. It found a significant portion of spills (from 26 percent in Colorado to 53 percent in North Dakota) occur at wells that experienced more than one spill, which suggests that wells where spills have already occurred merit closer attention.